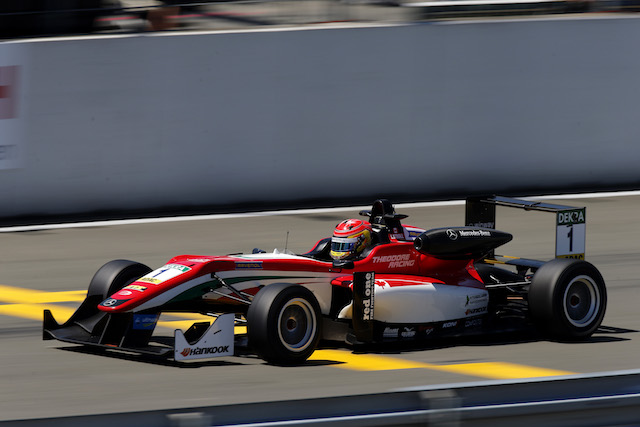 Lance Stroll has taken his second FIA Formula 3 European Championship?win of the weekend at the Norisring, extending his points?lead even further.

Despite having to restart the race from the safety car three times and going through a small red-flag period, Stroll easily held off the pressure as those behind him took each other out.

It wasn’t long before the safety car was brought out?again as George Russell made contact with Joel Eriksson into the final hairpin, putting both drivers out of the race.

Just as the safety car was about to come in for the second time, another incident occurred as?Pedro Piquet misjudged?his?distance behind Ryan Tveter, and subsequently flew over the back of the American driver. Piquet’s car then slid down the inside kerbing of the hairpin before being spat out head on into the Motopark car of Niko Kari. Both cars retired on the spot as the red flag was shown due to the excessive clean up needed.

The race was once again restarted behind the safety car after a further 10 minute delay for the final few minutes of racing. But there was another?collision, this time between Mucke team mates David Beckmann and Mikkel Jensen on the final straight, where Beckmann tried to defend his position ahead of the Dane before both cars wheels entwined and they slammed into the inside barriers.

This effectively made passing into the final section of the track impossible due to double-waved yellows and gave Stroll an easy ride to the chequered flag.

Hubert kept his second position from Sette Camara who took the last spot on the podium for third.

Zhou held off Prema drivers Maximilian Gunther and Nick Cassidy for fourth position, with Cassidy once again making up many positions after starting 19th on the grid.

Callum Ilott?took seventh position ahead of Carlin’s?Alessio Lorandi, with rookies?Ben Barnicoat and Ralf Aron rounding out the rest of the?points paying positions in ninth and tenth respectively.