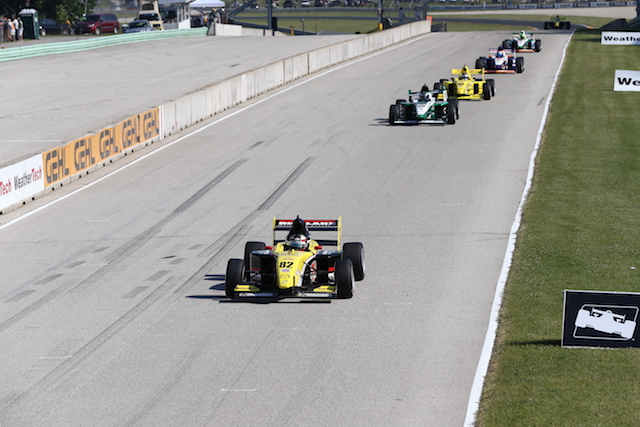 Race one saw Telitz win from second-placed?Nicolas Dapero, who picked up his second consecutive Pro Mazda podium finish despite an off-track excursion late in the race that ended his bid for a win.

Dapero’s Juncos Racing teammate?Will Owen completed the podium, while O’Ward finished fourth, one spot ahead of a debuting?TJ Fischer in the third Team Pelfrey entry.

Nico Jamin?set the fastest lap of the opening race, but after colliding with?Jake Parsons on the opening lap, Jamin would be relegated to last place – though Parsons would hold onto sixth despite driving most of the race with rear wing damage.

The second race later in the afternoon saw Telitz again unchallenged at the front, going on to lead every lap on the day en route to his third victory of the season. J

amin would recover admirably from his Race 1 letdown to finish second – it’s the first podium finish for Jamin since his graduation from a dominant USF2000 campaign last season.

Owen would again stand on the final step of the podium, and again, O’Ward would finish just one spot short of a podium finish – the first and second times all season that the Mexican driver has missed the podium after finishing first or second in the first seven races. Dapero would complete the top five.

The two wins for Telitz put him just 28 points adrift of O’Ward in the championship battle going into the season’s second of two oval races at Iowa Speedway.