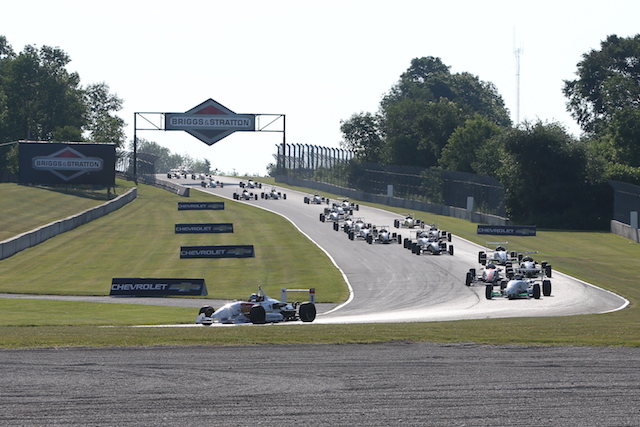 Anthony Martin has now won four of his last five USF2000 races – and more importantly, tied on points with?Parker Thompson?for the championship lead – with a weekend sweep at the Road America circuit.

By leading every lap in both races on Saturday, Martin now moves onto 217 points together with?Cape Motorsports with Wayne Taylor Racing teammate Thompson.

It was Advance Australian Fair in the first race on Saturday morning, as Martin led an all-Aussie podium completed by the reigning Australian F4 champion?Jordan Lloyd?and?Luke Gabin.

Race two was a much cleaner affair, and looked set for another 1-2 finish between Martin and Lloyd. But on lap twelve, Lloyd’s car ran off track as he was chasing Martin down, forcing a bitter retirement with just five minutes left in the race.

Lloyd’s off was enough to promote Franzoni to second and Thompson to third,?enough for Thompson to retain a share of the points lead.

Agren, meanwhile, held onto fourth and led a train of cars home to her best-ever USF2000 finish, with under two seconds covering the fifth through seventh placed cars of Rickards, Cane, and Gabin.

Lastochkin and Luo finished eighth and ninth despite making contact early in the race, and?Robert Megennis?rallied to finish in tenth.