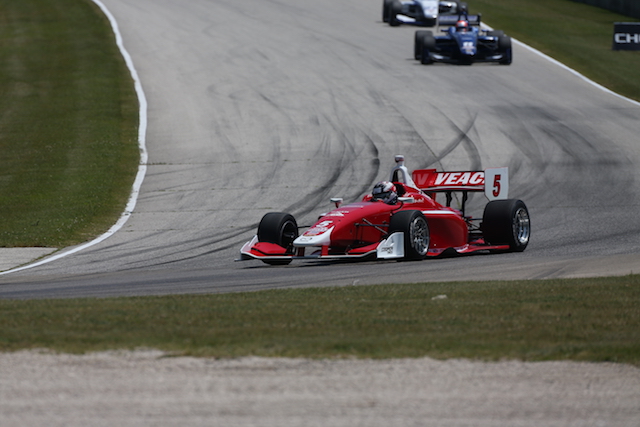 Zach Veach would not be denied on Saturday afternoon, as the 21-year-old Ohioan celebrated his first Indy Lights victory in nearly two years by going wire-to-wire in the first of two Indy Lights races at Road America.

Veach sailed out to the lead from the drop of the green flag, and held a margin as large as 5.5 seconds at one point of the race, leading every lap from pole position to take his first win in the series since August 17, 2014, when he won at the Milwaukee Mile oval.

There were wild moments as Veach slid his Belardi Auto Racing machine through the corners quite often, but the road back from a 2015 season spent missing in racing action?has finally culminated in a victory.

Dean Stoneman?finished second, despite being assessed a five-second post-race time penalty for running?Andre Negrao?wide at turn five. He was not the only championship contender to run afoul of Indycar Race Control, as?Santiago Urrutia was given the same penalty for punting?Juan Piedrahita at the exact same corner. However, Urrutia would find himself relegated to ninth in the order.

Felix Serralles would finish third, ahead of his Carlin teammate and championship leader?Ed Jones – who drove the second half of the race with minor front wing damage, but still did more than enough to hold his championship advantage.

Out of the chaos, rookie?Zachary Claman DeMelo matched his career-best result with a storming drive to fifth place capped off with many late overtakes, the last of which was pulled?on?Kyle Kaiser, who finished sixth.

Debuting drivers?Garret Grist and?James French?did very well to finish seventh and eighth in their first Indy Lights races, both ahead of Urrutia, with Negrao recovering from his incident with Stoneman to finish tenth.

Andretti Autosport’s other two drivers felt the sting of disappointment, as?Shelby Blackstock?spun out of a solid sixth place late in the race, while?Dalton Kellett?was the only retirement of the afternoon after beaching his car in a gravel trap.