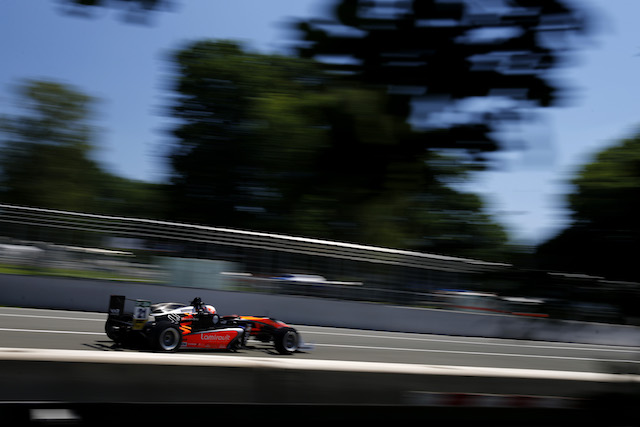 Anthoine Hubert has taken his debut win in the FIA Formula 3 European Championship?in a?safety car-riddled second race at the Norisring.

With three separate visits from the safety car, Hubert was able to control the race comfortably at each restart to take his maiden win in F3 machinery.

The Frenchman was able to keep his lead into Turn 1 at the start as championship leader Lance Stroll and his Prema team mate Maximilian Gunther followed him through.

It wasn’t long before the first safety car was needed as?Alessio Lorandi and Ralf Aron came together out of Turn 1, and?Ryan Tveter and Ben Barnicoat?collided out of?the?Scholler S on the same lap.

Hubert was able to easily keep his lead on the safety car restart, but it wasn’t long before Red Bull Juniors and team mates?Sergio Sette Camara and Niko Kari came?together out of Turn 1, with Sette Camara coming off worse and retiring from the race.

As the safety car came in for the second time, it was Nick Cassidy who made a move on George Russell into the first corner, with the Brit?going on to lose positions to both Niko Kari and Callum Illot a lap later.

However, another safety car was brought out as William Buller lost?it into Turn 1, taking out both Harrison Newey and Pedro Piquet in the process.

With only three minutes left on the clock, Cassidy overtook both the Motopark drivers of Guanyu Zhou and Joel Eriksson before the chequered flag was flown.

Hubert took the win from Stroll and Gunther in second and third places, with Cassidy making it a Prema 2-3-4 from 19th on the grid. Eriksson made up for his retirement in race 1 to finish fifth ahead of Zhou and Illot in sixth and seventh positions respectively.

Mikkel Jensen fell back from fourth on the grid to finish in eighth position, just ahead of?Russell who had fallen further back in ninth position, with Ralf Aron surviving from his early clash to finish in the final points paying position in tenth.