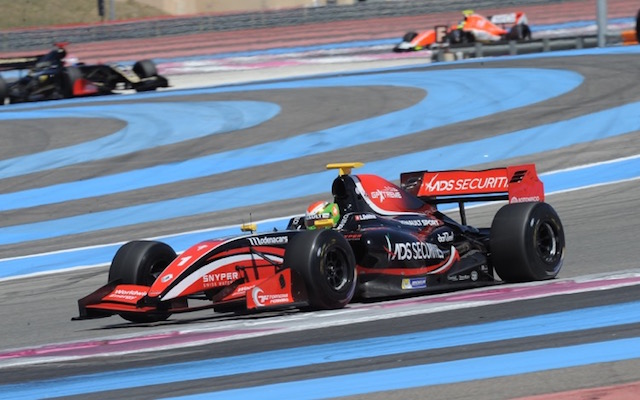 Formula V8 3.5 rookie?Louis Deletraz reignited his title ambitions with his second win in the category in race two at Paul Ricard.

Deletraz started third on the grid and remained there in the early stages behind front row men?Roy Nissany and?Egor Orudzhev, but he was able to outpace them on an alternative strategy to claim victory.

He was two-and-a-half seconds off the lead?before he made his mandatory pitstop on lap eight, and when the Lotus and Arden teams chose not to?react to Fortec’s strategy call, he was able to lap around a second-a-lap faster in clean air on fresh rear tyres.

Having caught Nissany when the Isreali went straight on at the chicane on the Mistral Straight, Orudzhev eventually pitted at the end of lap 13 but rejoined a good distance behind Deletraz.

Nissany reacted to that and pitted a lap later, but it was too late and he was unable to prevent Deletraz sweeping into the lead. Furthermore he had to defend from Orudzhev, meaning Deletraz had a seven-second advantage by the end of the lap.

Nissany quickly shook Orudzhev off and started cutting the gap to Deletraz, but the Renault Sport Academy driver?still had 2.8s in hand by the end.

Orudzhev followed up his race one win with third, while Aurelien Panis?and?Rene Binder took fourth and fifth having claimed those positions on lap one.

Matthieu Vaxiviere climbed from eighth to sixth at the start ahead of championship leader?Tom Dillmann, but fell back through the pit stop phase and eventually retired.

Since winning the opening race at Aragon, Deletraz had been beaten by Dillmann in every race but with the single-seater veteran only mustering sixth on a low-key weekend on home ground, Deletraz has now cut the gap to 22 points.