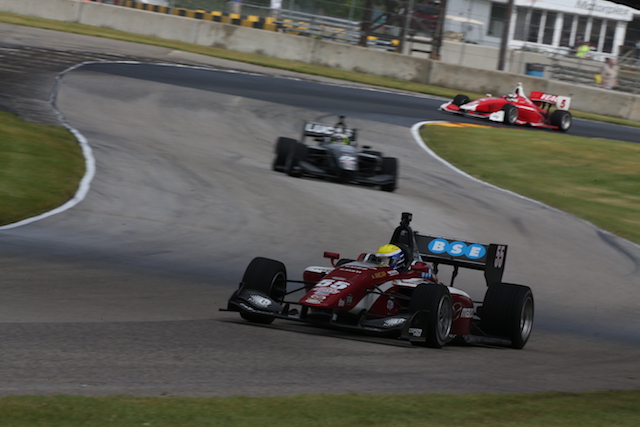 The race bore a much different complexion from Saturday’s race, as overnight rain called for a wet start and the entire field started on rain tyres. From the green flag, polesitter?Ed Jones led the way ahead of Saturday’s winner,?Zach Veach – while Urrutia sunk from second to sixth on the opening lap.

Veach continued to put the pressure on Jones for most of the opening laps, but?on lap five, his car number five spun at turn five – yielding no jackpot, and dropping Veach out of the top ten.

The next lap saw a brief full-course caution when?Dalton Kellett spun off for the second consecutive race. The second, however, blew the race wide open – as Jones and fellow Brit?Dean Stoneman contested the top spot in the order, the two made contact, forcing Jones sideways and into the path of his unsuspecting teammate?Felix Serralles.?Jones would lose three laps and finish thirteenth, Serralles would retire on the spot.

Under the second full course yellow, Stoneman pitted for a slow puncture, but switched over to slick tyres as the track began to rapidly dry out. The switch to slicks did not give Stoneman enough time to climb any higher than ninth, but he did set the fastest lap of the race by a large margin.

Up front, Urrutia gradually pulled away from teammate?Andre Negrao off the restart, and went on to win his second race of the 2016 season – all of which have come on road courses. Behind them, Veach recovered from his earlier spin to finish third and salvage a podium finish.

Zachary Claman DeMelo upped his career-best finish from yesterday by coming home in fourth.?Shelby Blackstock recovered from his unfortunate spin on Saturday by finishing fifth – his fourth top-five of the season.?Kyle Kaiser finished a quiet sixth, ahead of Juan Piedrahita in seventh,?the debuting?James French finishing eighth for the second straight race, with Stoneman ninth and?Garret Grist tenth.

With the misfortune befalling Jones on Sunday, the deficit between him and Stoneman in the drivers’ championship is now reduced to just 19 points, with Jones at 213 points, Stoneman at 194 Urrutia at 189 – the top three championship contenders now sit 24 points apart.