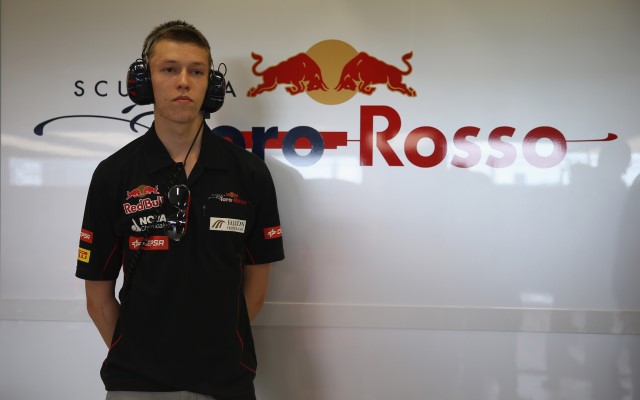 Red Bull stunned the motor racing world on Monday night with the revelation that they will promote Daniil Kvyat to a Toro Rosso F1 seat next year.

Kvyat is a big talent. There’s no doubt about that. He’s shown some outstanding form in the last couple of months in particular. But does that justify an immediate promotion from GP3/F3 level, when he’s only had 22 laps to show what he can do in an F1 car (going off track in the process)?

Red Bull will have considerably more information on Kvyat than anyone looking in from the outside, having signed him up while he was winning titles in karting. His first season in cars in Formula BMW in 2010 seemed pretty underwhelming, finishing tenth in the standings with just one podium as younger Junior Team stable-mate Carlos Sainz managed fourth and won a race.

Both were moved on to Formula Renault 2.0 for the following season, and Kvyat was somewhat closer to Sainz this time even if he was still behind. The Spaniard was second in the Eurocup and winner of the NEC, with the Russian coming third and second respectively. While Sainz had earned a promotion to F3 for 2012 (where he would go on to struggle), Kvyat was kept behind in Renaults for another season.

At that point, Red Bull clearly felt he would benefit from not being hurried up the ladder.

He started the year as the undoubted title favourite in the Eurocup, but ended up unable to beat Stoffel Vandoorne. He certainly demonstrated his speed with wins in half of the 14 races, but he lacked the consistency of his Belgian rival. He only just managed to win the less-competitive Alps series, despite again winning seven races

Red Bull promoted Kvyat into GP3 alongside Sainz for this season. Both drivers struggled with the easily-worn tyres at the season opener in Barcelona, but Kvyat then began to impress with four top five finishes from the next four races. A mechanical failure made the Nurburgring round a write-off, but he then scored his maiden podium at the Hungaroring. 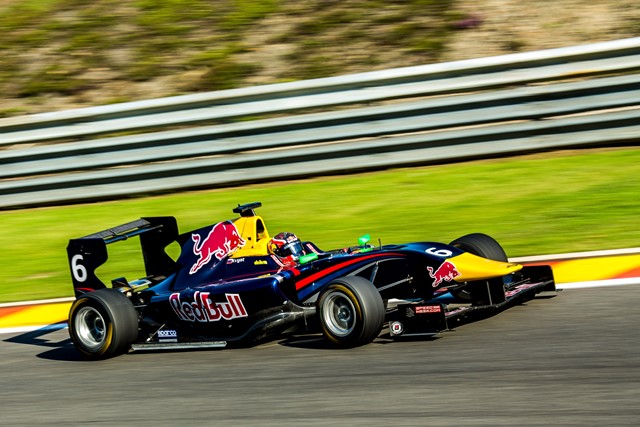 It was after the summer break though when he really came on strong, winning at Spa after getting the jump on pole-sitter Sainz. He followed that up with a win from pole at Monza and a second place in race two. The MW Arden car was clearly the class of the field in Italy, but Kvyat’s driving was impressive nonetheless. He’s only seven points behind Facu Regalia with the Abu Dhabi round remaining with the momentum clearly with him.

Kvyat’s lack of experience relative to his rivals has made his GP3 performance particularly outstanding. He is the only driver in the current top 13 not to have previously contested a season of F3, GP3 or something higher up the ladder. He was expected to be quick and expected to fight for wins, but not challenge for the title. That achievement would have been a harder one to attain had one of his rivals grabbed hold of the championship during the first half of the year as he was still getting up to speed, but to have become the top driver in such a competitive series within his first year is worthy of merit.

His reputation has been further boosted this year by his parallel programme in the FIA F3 European Championship. Contesting rounds three through to nine, he was ineligible for points in a fifth car entered by the Carlin team but he would have scored the fifth-highest number of points in the races he contested.

That’s not immediately as impressive as his GP3 record, until you assess the drivers around him. Of the four who would have out-scored him, three were with the Prema team that’s had a stranglehold on that series for three years now and all of them had at least a year of F3 under their belts in some form. Carlin are known for their dominance of the British series but have yet to truly hit the front in the European competition. Kvyat out-performed their team leader and third-year F3 man Harry Tincknell as well as Jordan King, who himself has been lauded for an impressive first year jumping up from the same level as Kvyat – Formula Renault 2.0. 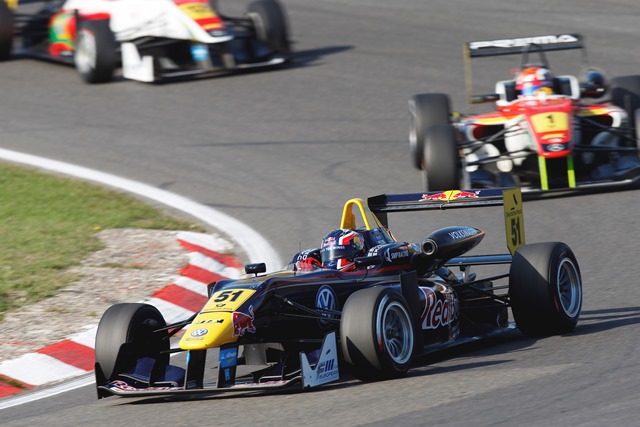 So, it’s clear that Kvyat has had a superb season. The point of contention is whether such a season warrants that immediate promotion into an F1 race seat, bypassing the usual finishing school-level of GP2 or Formula Renault 3.5.

After all, Antonio Felix da Costa was probably even more impressive last year across his performances in FR3.5, GP3 and the Macau Grand Prix. With no vacancy at Toro Rosso he stayed on in FR3.5 for another year where Red Bull have since found that he isn’t up to scratch. (More on that in a future feature focussing on Felix da Costa.)

So what is the difference between Kvyat today and Felix da Costa 12 months ago? He’s less experienced, for a start. Red Bull might have known him for longer, but can they really be sure that he’s a finished article ready to perform in F1 and eventually win world championships? They cannot surely know that had he gone to FR3.5 next year he wouldn’t have suffered similar ‘struggles’ as Felix da Costa. Plenty of drivers have breezed their way up the first couple of rungs on the ladder and then tripped over on F1’s doorstep. See Jules Bianchi as the perfect example (Ferrari stuck with him, but you have to doubt that Red Bull would have done the same).

Results-wise, Kvyat has not even looked, year-on-year, as good as that. But there is of course more to a driver’s performance to his results, and Red Bull have the full benefit of all that information.

What if they have believed in his ability all along and are sure he has none of those weaknesses that would stop him being the next Vettel? If they knew earlier in the year that he would be capable of jumping up to F1 so soon, why did they not give him more time at the Young Driver Test at Silverstone in July to assess him?

Felix da Costa had a day and a half with Red Bull and Sainz was given an afternoon for Toro Rosso and a morning for Red Bull, leaving Kvyat with just an afternoon in the Toro Rosso. Doing just 22 laps, it’s hard to imagine he was able to make a particularly ground-breaking impression. It’s difficult to read much into testing times, but the word seemed to be that Sainz was genuinely rapid.

If the allocation of that testing was anything to go by, Sainz went into that test ahead of Kvyat in the pecking order (quite rightly given their relative performances through Formula BMW and Formula Renault 2.0), and it’s difficult to see how the test itself could have changed that opinion. 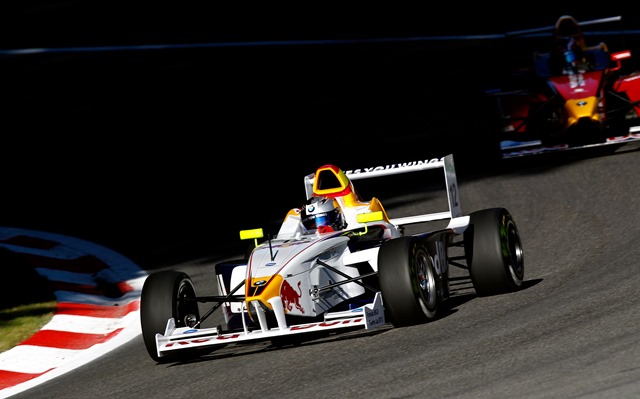 Kvyat was in Sainz’s shadow through Formula BMW (above) and Formula Renault (Photo: GEPA pictures/Andreas Pranter)

Sainz continues to struggle to turn his prodigious pace into results and needs the full season of FR3.5 that he looks set to do next year. But have Kvyat’s recent wins completely swayed Red Bull into thinking he’s ready for F1 already – seemingly changing the position they held just a few months ago? If so, that seems like a rash decision.

This, for me, is why it’s easy to imagine that commercial factors have come into play. There’s the widely-discussed marketing potential for Red Bull of having a Russian driver, but more influential would be possible external backing from the nation. It’s important to clarify that this is just speculation at this point – reported in some quarters but denied in others.

The likely source of this supposed funding would be the SMP Racing project. Their logos appeared briefly on Kvyat’s F3 car earlier in the year – something I considered at the time to be a positive development for Kvyat’s future chances given the support that Sainz enjoys from Toro Rosso sponsor Cepsa and other parties. Based on the amount of investment that SMP have evidently put into single-seaters and sportscars this year, it would hardly be a surprise to see them helping a talented Russian youngster into F1.

We might have to wait until Melbourne to see what truth there is in that, but it is not something that either driver nor team should be chastised for. If I were in Red Bull’s shoes and were offered many millions to run a talented, in-form driver from my own junior scheme, I would take up the offer immediately. For me, it is the only justification for the move that I am completely comfortable with accepting.

It could help to explain why the announcement has been made so relatively early in the season. If Red Bull were choosing solely between their own drivers, there was no pressure for the decision to be made so soon. As far as we’re aware, none of them were going to be snapped up by a rival team. Toro Rosso could have given Kvyat some Friday running in the remaining GPs this year, just to be sure. They could have waited until after his GP3 title decider, just to be sure. But something has already made them sure. 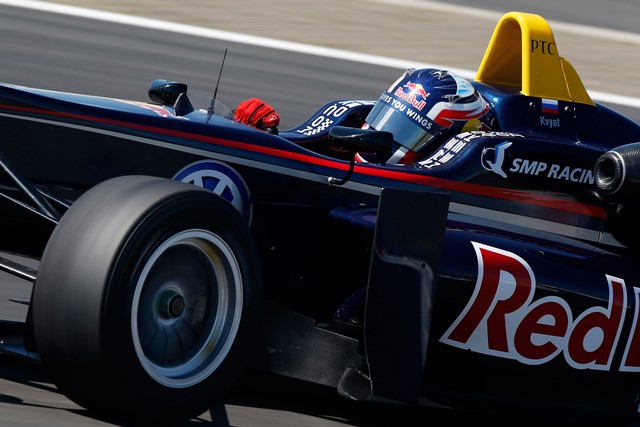 Having doubts over the decision to promote Kvyat to F1 so soon does not mean I have doubts over his ability. He has shown similar qualities to other Red Bull Juniors at this point in their careers, but none of them were thrust up to the top level so soon. It is this change in philosophy that is difficult to understand, not their belief in one driver over another.

Perhaps Red Bull have decided that having its drivers race at FR3.5/GP2 level is unnecessary if they’re already looking good. After all, it used to be the norm that the most talented drivers would graduate straight to F1 from F3 with little problem. But as with Felix da Costa, that extra time in the junior formulae provides a last opportunity for weaknesses to be found and perhaps worked upon, something that can’t just be done through testing in F1 machinery these days.

In a time when the most talented rookies are struggling to make an immediate impact in F1, is it sensible to promote somebody with just four years of racing experience under their belt? The more practice a driver gets before he goes to F1, the more opportunities he gets to challenge himself. It’s not necessarily a good thing to breeze through the junior categories. Lewis Hamilton did it and has since seemed to struggle coping when things haven’t gone his way. Everything went his way before he got to F1. He probably didn’t know how to react when he couldn’t meet expectations.

Futhermore, while Felix da Costa has had to play out his season under intense media and public scrutiny, Kvyat was still relatively under the radar at lunchtime on Monday. However much media training Red Bull gives its youngsters and however cool and laid-back he might appear, he’s not going to know what’s hit him just at his pre-season test alone, let alone at his first race.

Perhaps some optimism can be found by looking at who will be on the other side of the Toro Rosso garage next year. Jean-Eric Vergne has found the going tough in his first two seasons of F1. But he’s been given another chance. Red Bull have long believed he is something special, more so than Ricciardo.

Maybe they will give the same allowances to Kvyat. 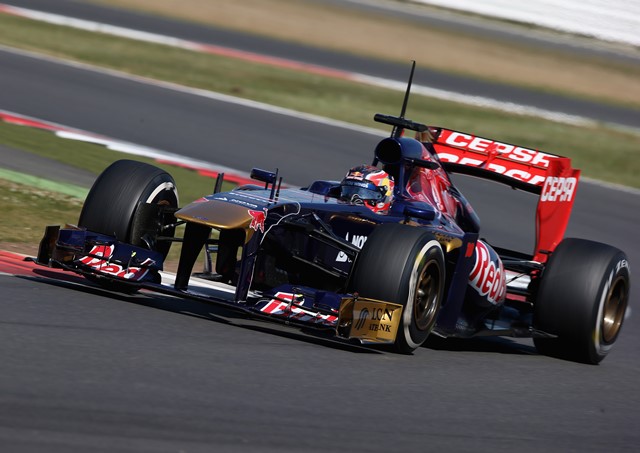