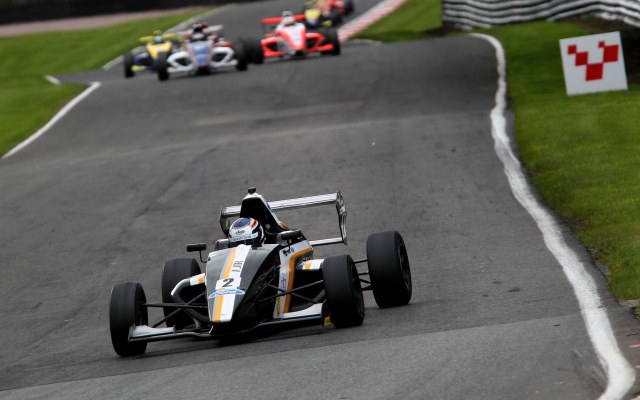 Jayde Kruger extended his lead in the Formula Ford GB standings with victory in race two at Oulton Park, which was shortened by rain and a red flag.

Kruger’s JTR team-mate Max Marshall led the race from the reverse grid pole position until lap six, when he was overtaken by Kruger, who had started fifth. Marshall then went off in a sudden rain shower, as did Sam Brabham and Juan Rosso, prompting the stoppage.

Those still running were classified according to their positions at the end of lap five, making Kruger the winner. Race one winner Harrison Scott spent most of the race in fifth after starting sixth, but ended up second with Marshall, Rosso and Brabham being unclassified.

Chris Mealin was promoted into the final podium spot, ahead of Ashley Sutton, Connor Mills and James Abbott. Andy Richardson was seventh ahead of Ricky Collard, debutant Connor Jupp and Greg Holloway.