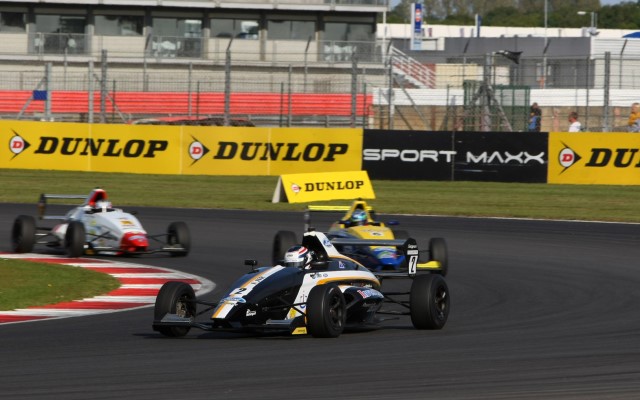 Jayde Kruger kept up his Formula Ford title challenge with victory in the opening race of the penultimate round at Silverstone.

The South African led from pole position to chequered flag, but although he was never truly comfortable, he never looked to be seriously under threat either and claimed his 11th win of the season by 1.642 seconds.

Also taking the bonus point for the fastest lap, Kruger reduced his deficit to championship leader Harrison Scott from 17 to 13 points.

Scott maintained second throughout the race, and didn’t let Kruger escape despite having to worry about keeping Ashley Sutton behind him.

Ricky Collard enjoyed a good start to move up to fourth from sixth on the grid. Max Marshall pressured the karting graduate but his attempts to get by ended with him going off at Brooklands.

That gave Collard a brief reprieve, but he was overhauled before the flag by the Radical duo of James Abbott and Juan Rosso. Sixth place did give Collard the consolation prize of a pole position start on the partially reversed grid for race two.

Michael O’Brien passed Louise Richardson early on to finish seventh, with Chris Mealin ninth after resisting pressure from Jessica Hawkins, who made the top ten on her single-seater debut once Clay Mitchell was forced to serve a drive-through penalty for not respecting track limits.