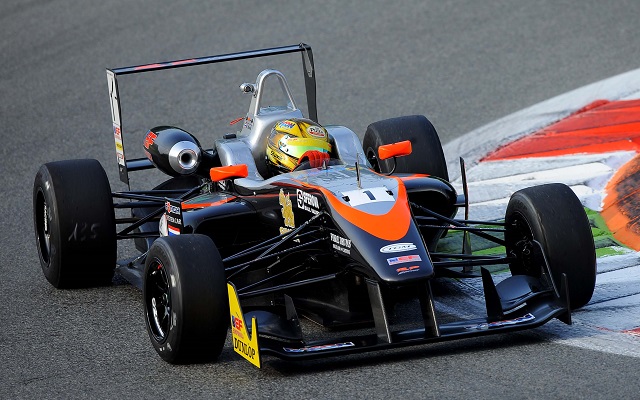 Sandy Stuvik continues to be unbeatable in the second half of the 2014 Euroformula Open season, having dominated the first race of the penultimate round at Monza.

Although Stuvik lost the lead to his teammate Andres Saravia at the start, he reclaimed first in the second lap and then calmly drove off into the distance, not to be troubled again.

On the other end of the spectrum for title contenders, Alex Palou‘s championship chances saw a significant drop when he was ruled out of the race in the first corner, his car flipping in the air after contact.

A huge battle for the remaining podium spots emerged later on in the race among four different drivers, who traded positions almost every lap. Eventually, it was Artur Janosz and Yu Kanamaru who made it to the top three, while returnee Kevin Giovesi had to settle with fourth.

Saravia was also present in the battle yet a last lap spin from the Guatemalan saw him relegated to fifteenth.

With three more races to go from the season, Stuvik’s lead is 69 points over Janosz, who took second in the standings after Palou’s retirement. Tomorrow, a top-five finish from Stuvik will allow him to take the title.