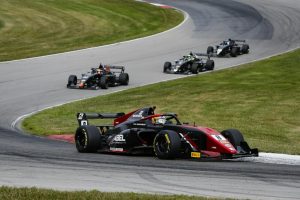 Kyle Kirkwood continued to dominate the inaugural Formula 3 Americas championship with another hat-trick of victories in the second round of the season at Mid-Ohio.

It was three lights-to-flag victories for Kirkwood, whose championship lead now stands at almost 50 points over Baltazar Leguizamon.

Leguizamon became the first driver in the championship to have a team-mate, with United States Formula 4 star Benjamin Pederson joining him at Global Racing Group. But the championship?s grid remained at just four cars, with Importante Autosport?s Peter Portante opting to skip the round.

Kirkwood started the first race of the meeting on pole, lining up alongside Baltazar Leguizamon, Pederson and John Paul Southern Jr.

Pederson passed team-mate Leguizamon to take second off the line. The championship newcomer tried to keep touch with Kirkwood, keeping the gap at under three seconds, but wasn?t able to put too much pressure on the Abel Motorsports driver.

Southern spent the early part of the race chasing Leguizamon before a mechanical problem put him off the track nine laps before the chequered flag.

The safety car was brought out to clear Southern?s car, which was stranded in the gravel, enabling Pedersen and Leguizamon to close onto the back of Kirkwood?s car. Neither driver could challenge Kirkwood on the restart though, and he finished almost two seconds ahead of Pederson.

Race two started in dry conditions, with Kirkwood once again on pole. This time the championship leader was immedietly able to pull away from the rest of the field while a strong starting Southern ran side by side with Pederson at the first corner.

Pederson held onto second and Southern was left to defend against Leguizamon, who was looking to reclaim his starting position.

The rain came midway through the race and, while the lap times began to slow, Kirkwood held onto the gap he?d built to Pederson, finishing 41 seconds ahead of the second placed driver.

There was no slowing for either Southern or Leguizamon, who were stuck in a tight battle for the final podium position. Southern put up a strong defence, but a small mistake put him off on the final lap, allowing Pederson to take third.

Southern was looking to end his weekend on a high in race three after a disappointing start to the meeting, but a hand injury, sustained earlier in the meeting, put him on the back foot.

The Southern Motorsports driver started on the front row of the grid but, though he made a strong start, he soon fell backwards.

At the front of the field, Kirkwood enjoyed a quiet race. He gradually built his lead of Leguizamon to more than 12 seconds.

Pederson took third, while Southern took the chequered flag a further half a minute behind.