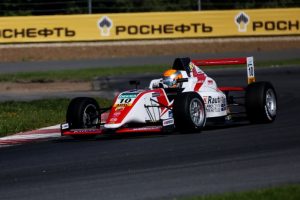 Two wins at the Moscow Raceway for Konsta Lappalainen has brought the Finn closer to the Formula 4 North European Zone championship lead.

The Kart In Club Driving Academy driver topped the first qualifying session, which sets the grid for the first two races, by a scant 0.022 seconds over MP Motorsport’s Isaac Blomqvist.

Lappalainen set the foundations for his first victory of the season with a strong start in the opening race, pulling away from Blomqvist and returnee Aleksandr Vartanyan, who finished third in the championship in 2016 and has since raced in the Formula Renault Eurocup.

Vartanyan was guaranteed second when Blomqvist was handed a drive-through penalty in the closing stages of the race, which dropped him to last. Ivan Berets followed SMP Racing team-mate Vartanyan home in a distant third.

Blomqvist struck back in the second race, hunting down and then pulling away from Lappalainen. On the final corner of the last lap Lappalainen lost second to Vartanyan, although with the latter ineligible for points the move was not too costly.

Tuomas Haapalainen, who took fastest lap in the first race, finished fourth, with Salmenautio once again completing the top five.

The final race of the weekend was a classic, with Lappalainen and Haapalainen trading the lead and battling all the way to the line for race victory.

Lappalainen took pole, but it was Haapalainen who led into the final corner at the end of the race, and looked to set victory in what was his first appearance of the season. Lappalainen thought otherwise though, and drew level with Haapalainen as they crossed the line. The win went to Lappalainen, by a scant 0.003 seconds.

Blomqvist finished third, with his championship lead reduced to 10 points by Lappalainen. Ivans Shvetsov and Berets were fourth and fifth.