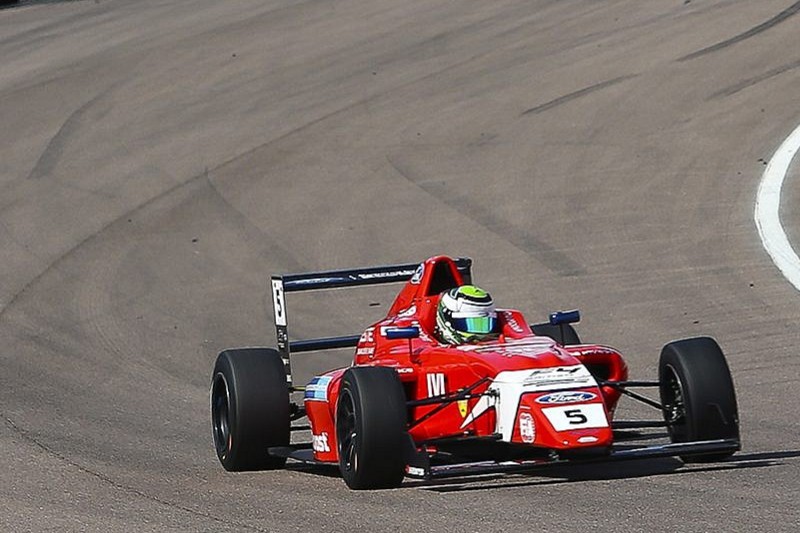 Pastrik Pasma took his second British Formula 4 win of the weekend and his career at Rockingham, as Arden lost a potential top four lockout to a lap one crash.

Pasma came under immediate pressure at the start of the race from team-mate Jack Doohan, who was followed by fellow Red Bull junior Dennis Hauger. Approaching the Deene hairpin, Doohan took a wide entry line, with Hauger in third sticking to the inside kerb.

As Doohan swept back on to the racing line, Pasma made a small lock up after the first apex of the corner, and the hesitation from Hauger behind led to him colliding with Doohan. Both retired at the end of the lap.

Pasma and Priaulx immediately pulled away, with a queue of cars forming behind Simmons. This helped rival and chamionship leader Kiern Jewiss, who had started 12th thanks to a 10-place grid penalty handed to the Double R Racing driver for his involvement in a collision with Simmons in the previous race.

Jewiss was up to fifth by the sixth lap, making up the last position after team-mate Paavo Tonteri pulled off on the pit straight with mechanical problems. The placement of Tonteri’s car meant a safety car was required, putting Simmons back on to the rear of the leaders.

When racing got under away the two Arden drivers once again pulled away, and Jewiss didn’t waste time in taking fourth from race two winner Johnathan Hoggard around the outside of Deene.

He couldn’t get past Simmons though, who put on a defensive masterclass for the remainder of the race. This made it easier for Pasma and Priaulx, with the latter never getting quite close enough to challenge Pasma for victory.

Fourth down to eighth place ended up bunched up behind Simmons, whose only mistake came at the last corner. With Jewiss up his inside, his exit from the the Brook chicane was poor, and with a stronger run Jewiss edged past to take third, extending his championship lead by another three points.

Hoggard finished fifth for Fortec Motorsports, almost moving past Simmons and Jewiss at Deene at one point, with Simmons’s team-mate Josh Skelton taking his first rookie class win in sixth.

Hampus Ericsson got his best result since Oulton Park in seventh, prevailing in an agressive battle with Jamie Sharp, who harpooned him out of the previous race.

Lucca Allen and Sebastian Alvarez completed the points after Manuel Sulaiman was handed a 10 second penalty for jumping the start.