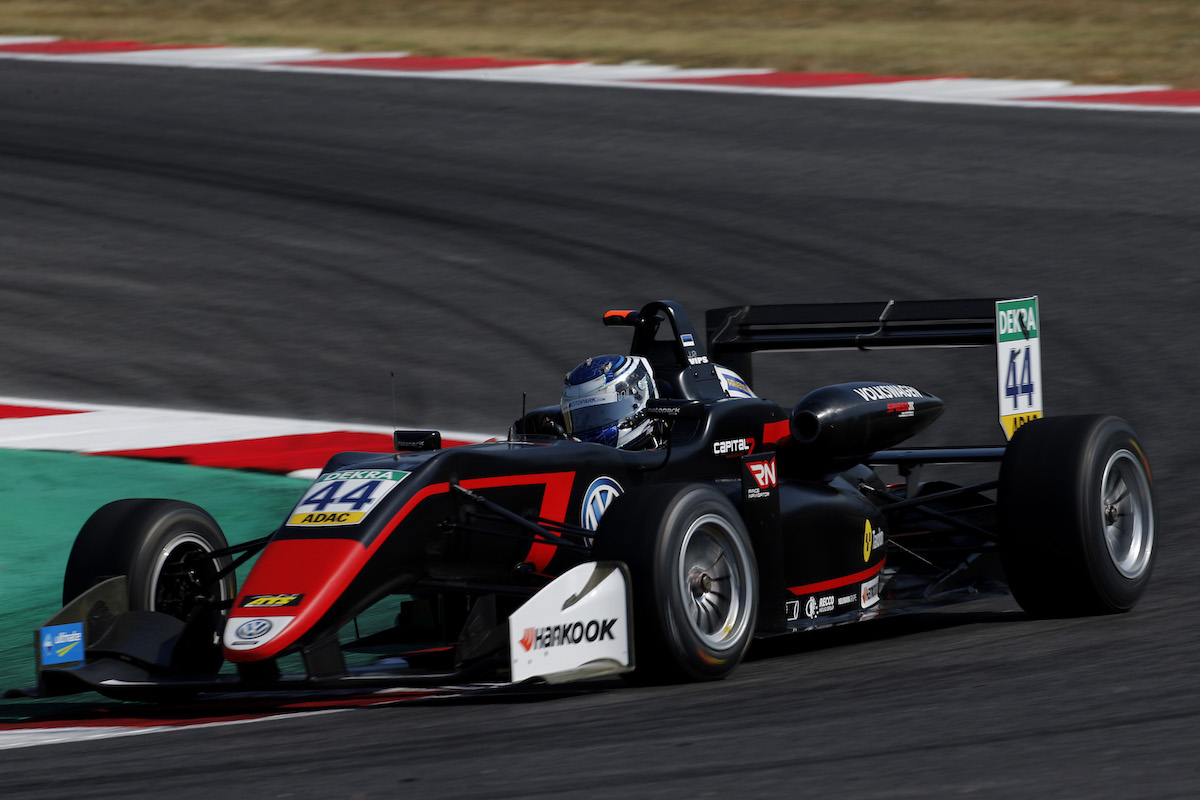 Juri Vips held off Alex Palou and Mick Schumacher to win the second Formula 3 European Championship race at Misano, which was affected by a major shake-up to the grid shortly beforehand.

Stewards handed a raft of grid penalties to 13 of the drivers for exceeding track limits during the wet second qualifying session on Saturday evening, with pole-sitter Vips one of the few to not be affected.

He was joined on the front row by Enaam Ahmed, who was originally 11th fastest in qualifying but got a better start than Vips to lead into the first corner.

Vips carried more speed around the outside of the first right-hand turn though to remain alongside and then re-take the lead through the left-handed Turn 2.

With the track damp in places at the start of the race, the leaders all ran wide through Turn 13 and when Ahmed went wide again at Turn 14, his Hitech team-mate Palou nipped past for second place.

Palou briefly passed Vips on the second lap into Turn 13 but he ran very deep and had to concede the place again.

The pair remained close throughout the race, with Vips just half a second ahead at the finish as he took his third win of the season.

The result moves Vips up to second in the championship, just 18 points behind Motopark team-mate and Dan Ticktum and two points ahead of Marcus Armstrong.

Schumacher took a four-place grid penalty after originally qualifying third, but quickly made up ground from sixth on the grid and took third place at around one-third distance when Jehan Daruvala ran wide just in front of him and slowed with an apparent car problem.

Prema driver Schumacher closed on the front two but ultimately settled for third as he continues to also close in on the championship fight.

Having avoided a penalty after qualifying, Ahmed instead fell foul of the track limits police during the race, earning him a five-second penalty while he was running fourth.

He responded with two fastest laps to build a gap over those behind, but Dan Ticktum – who started 11th – soon put a pass on Ralf Aron to allow himself to remain within reach of Ahmed and finish fourth to increase his championship lead.

It looked as though Ahmed would do enough to remain ahead of Aron in the final results but after catching Schumacher late on, the ultimately put him sixth by less than a tenth of a second.

Armstrong, along with Ferdinand Habsburg, was worse hit by the stewards decisions, with a seven-place grid drop moving him from second to ninth.

His biggest issue however was a very poor getaway from the grid, causing him to finish 13th.