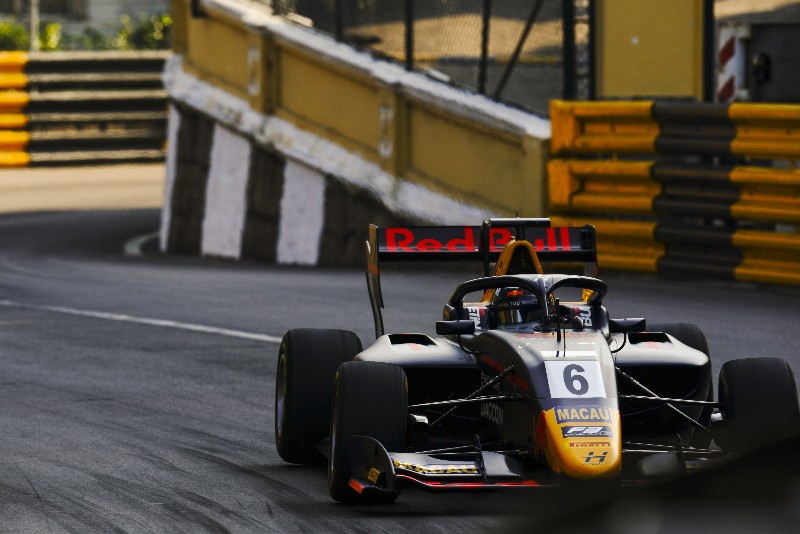 The Red Bull junior avoided any drama and put in a faultless drive to maintain a 1.5s advantage over Prema’s Robert Shwartzman after an early safety car.

Shwartzman was briefly able to challenge Vips on the restart, but came under pressure from ART Grand Prix’s Christian Lundgaard. As the Ferrari junior defended against Lundgaard, Vips was able to build the lead back up.

Renault junior Lundgaard then dropped off from Shwartzman, who tried chasing down Vips and finished 1.549s behind.

The safety car was brought out on the opening lap after Jenzer Motorsport’s Arjun Maini was sent into the wall at Lisboa.

Maini made contact with Logan Sargeant as the Carlin driver tried to go up the inside of the Indian. As Maini stopped across the track, those behind him became stuck, though most of the field managed to avoid any serious damage.

Sargeant’s team-mate Dan Ticktum, who was running close behind Maini, tried overtaking HWA Racelab driver Jake Hughes while passing the stricken car. He got squeezed up against the wall into the air, forcing him to pit for repairs.

Hughes and Campos Racing’s Enaam Ahmed were unable to get going again after the crash.

Sargeant continued undamaged and ended up challenging Sauber junior Callum Ilott on the final lap for fourth. Ilott, who was passed by Lundgaard on the opening lap and then MP Motorsport’s Richard Verschoor midway through the race, managed to hold off the American to come home fifth.

With just two laps remaining, Felipe Drugovich crashed out of 15th place at Lisboa. His Carlin was recovered without the need of a safety car period, and promoted last placed starter Enzo Fittipaldi (Sauber) up to 14th.