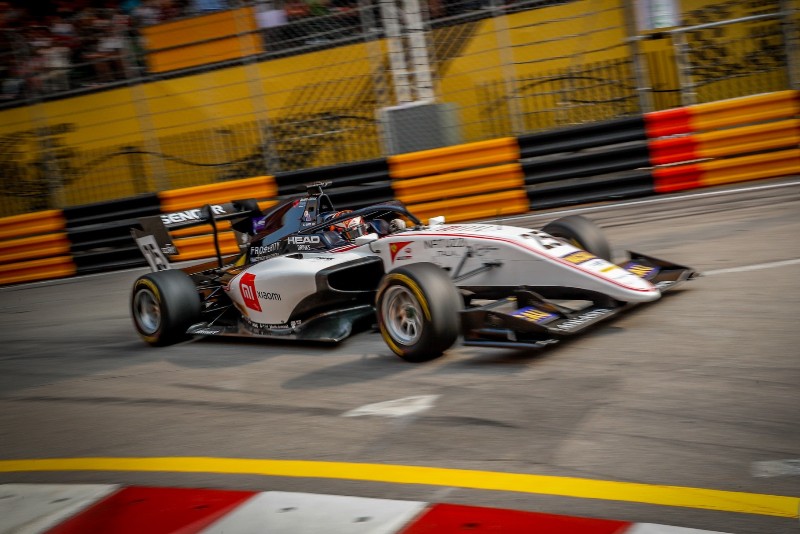 The 21-year-old has raced in Formula 2 this year with Sauber Junior Team by Charouz, and is currently 11th in the standings. He has remained with the team for Macau, alongside debutants Enzo Fittipaldi and David Schumacher.

While Ilott has raced at Macau every year since his car racing debut in 2015, each of those have occurred with the Dallara F312/F317 used in Euformula Open rather than the new faster Dallara car which he first drove in Macau free practice.

“Pretty happy with it,” Ilott said of his qualifying performance, which decides where he starts for the qualification race.

“We finally got a lot of laps, a lot of clear laps, so it was good to build off of that. Coming away with P3, very happy.

“Obviously the pace throughout the session was up there in the top five, so we’re clearly quite quick, but I think the other two were very, very quick that session and trying to stay with them was difficult. But I’m very happy with how the car performed, how the team did, and my result.”

Hitech GP’s Juri Vips took pole with a 2m04.997s lap, over half a second faster than third-placed Ilott.

In his previous four Macau attempts, Ilott has qualified second twice and third once, and was second fastest in Q1 on his debut appearance but failed to set a lap in the faster Q2 session. However, only once has he improved on his grid position in the race, and after winning the 2017 qualification race he ended up a lapped 15th in the grand prix itself.

“My plan; I’ve calculated it perfectly. So after my five years of racing here, P4, P5 is the best place to start. I’m starting P3, but I’m probably not going to get the best start in the world because I haven’t started this car [before].

“So I’ll probably drop back down to fourth or fifth, then I’ll launch into first by Lisboa.”