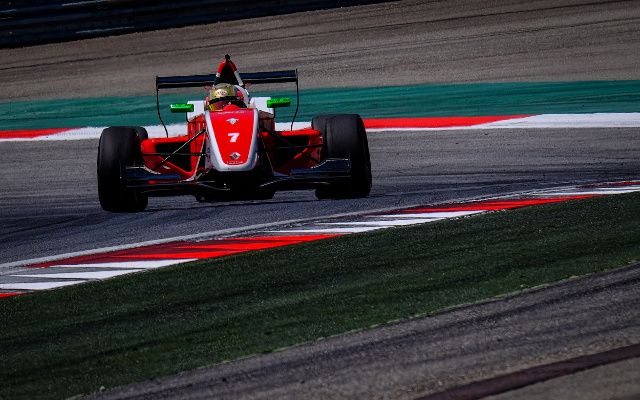 The free practice sessions for the third round of the Formula Renault 2.0 NEC season at Spielberg were topped by Kevin Jorg and Callan O’Keeffe respectively.

Jorg set the pace in the first session with his final lap with a time of 1m31.501s to beat compatriot, team-mate and championship leader Louis Deletraz by two tenths.

Next up was Charlie Eastwood, driving for a third team in as many NEC meetings. The Belfast driver began the season with Strakka before its withdrawal from FR2.0, then ran with Fortec at Silverstone and is now driving for AVF, who he debuted with at the Eurocup round at Spa-Francorchamps last weekend.

Next up were ART’s Max Defourny, JKR rookie Nikita Mazepin and Honda-backed GP2 racer Nobuharu Matsushita, taking part in practice only for AVF and gaining track experience ahead of his races at the Austrian venue later this month. Josef Zaruba completed the top 10 in another AVF-fettled machine.

O’Keeffe took 0.14 seconds off Jorg’s benchmark in the second session.

Matsushita was fourth ahead of Deletraz, Daruvala and Jorg, with the top 10 filled out by JKR’s Dries Vanthoor and AVF duo Zaruba and Eastwood.

11th in the second session was another driver gaining Spielberg experience ahead of the Austrian Grand Prix weekend – Alex Palou. Unlike Matsushita, the Spanish GP3 is set to take part in the full NEC weekend, driving a second car for the Inter Europol team alongside the team’s regular driver David Richert.

Ukyo Sasahara, who is Deletraz’s nearest rival in the points and claimed his maiden Eurocup win at Spa last weekend, was a lowly 18th and 15th in the respective sessions, from 21 entries.