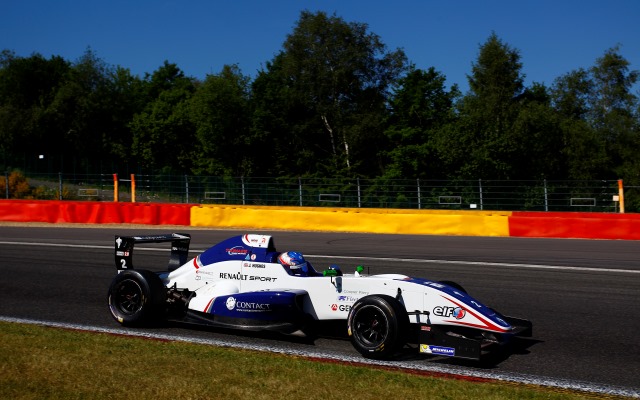 Jake Hughes will begin?the first?Formula Renault 2.0 Alps race of the weekend from pole position at Spa-Francorchamps.

Having taken his maiden Eurocup pole and victory last weekend at the same track, Hughes remains to be the driver to beat in Belgium.

Like many others, the Koiranen driver only put his name onto the timing screens in the final 10 minutes of the 25-minute-long session and he was up to first place with five to go.

His position was in no danger afterwards and the Briton was confident enough to pit before the checkered flag.

JD’s Matevos Isaakyan will start alongside Hughes, having been edged out by only two hundredths.

The second row will once again consist of a Koiranen and a JD driver as Jack Aitken and Thiago Vivacqua were the others to dip below the 2m20s barrier.

Podium finisher at the Red Bull Ring Vasily Romanov will start in fifth, followed by another Koiranen duo Stefan Riener and Philip Hamprecht.

Danylo Pronenko was eighth quickest and the top ten of the grid will be rounded out by Bruno Baptista and James Allen.