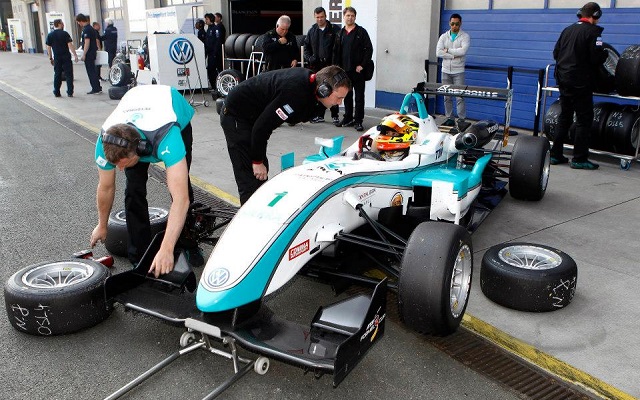 Malaysian?Nabil Jeffri?outclassed the field to take victory in the reverse-grid race two of the ATS Formel 3 Cup at Oschersleben this afternoon.

Pole-sitter?Maximilian Hackl made a good start to take the lead out of the first corner from the quick starter Sergey Trofimov?with Jeffri right behind him.

Jeffri made it past the Russian shotrly thereafter and worked his way past Hackl for the lead one lap later. From that point on, the fight for the lead was over as the Malaysian began to pull away from the rest of the field.

Behind Jeffri, Hackl came under increasing pressure from?Indy Dontje and?Markus Pommer. The German drove brilliantly to hold the pair at bay for several laps, before Dontje forced his way through at the first corner. Pommer then tried to pull a similar move on Hackl one lap later but ran wide, allowing?Sam MacLeod to come through and pass both of them for third position.

Pommer would end the race in fourth ahead of?Nikita Zlobin and?Weiron Tan.?Andres Mendez came home in seventh ahead of Trofimov, who recovered from a trip into the gravel early on in the race. Hackl only managed ninth with Nicolai Sylvest, who finished a lap down after pitting for a new front wing, rounding out the field.