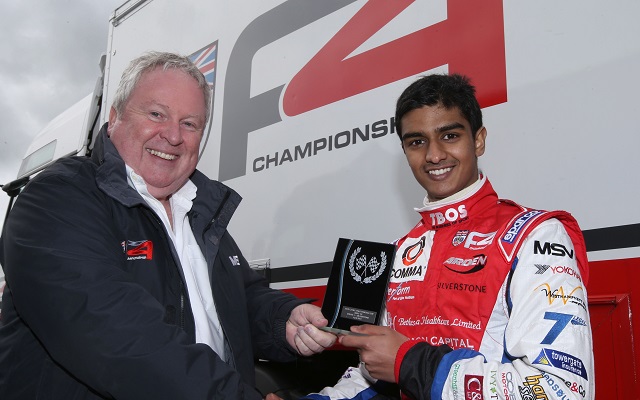 South African racer Raoul Hyman became the first race winner of the 2014 BRDC F4 season, putting on a stellar defensive drive to take the checkered flag in race one of the Silverstone weekend.

Hyman, who finished seventh in his debut season last year, established a good lead at the start of the race, pulling way clear of HHC teammate Sennan Fielding over the opening lap.

However, Briton Fielding would soon re-emerge as a victory contender, catching up to his teammate over the subsequent laps and, after slotting in behind Hyman, he attempted to take over in the lead of the race.

His South African teammate held his ground and Fielding had to back off. He would not get another stab at taking first as, shortly thereafter, he surrendered P2 to Diego Menchaca.

The scraps behind him allowed Hyman to pull clear and take his first victory in the series. Menchaca picked up second, while Fielding held on to third, holding back a charging Nicolas Beer, who starred on his F4 debut and made his way up to fourth from tenth on the grid.

Karting graduate George Russell, leading Gustavo Lima and Will Palmer. Arjun Maini fought his way up to eighth from sixteenth on his debut, while Rahul Raj Mayer and David Wagner rounded out the top ten – the latter having started in P20.