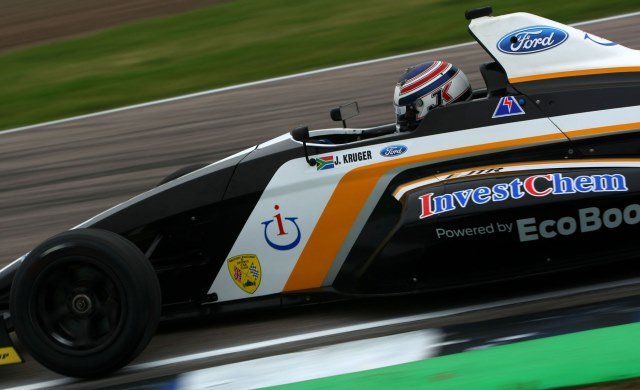 Jayde Kruger is poised to make up further ground on Formula Ford GB leader Harrison Scott at Rockingham this weekend after claiming a double pole position in qualifying.

The South African sits just six points behind Scott in the standings after a double win last time out at Knockhill, and will start races one and three from the front of the grid.

His fastest time was 0.082 seconds quicker than recent pacesetter Ashley Sutton, and his second best time was 0.050s faster than that of the MBM driver.

Ricky Collard upstaged his Falcon team leader Scott, beating him to the third best time by just 0.006s, with both trailing the front row men by six tenths of a second. Max Marshall was fifth for JTR. Scott will start third for the final race of the weekend, ahead of of Marshall and Collard.

Sutton’s team-mate Michael O’Brien will start both races from sixth, with Louise Richardson a fine seventh. Radical pairing James Abbott and Juan Rosso were confined to a pair of eighths and ninths respectively, with Chris Mealin completing the top ten.