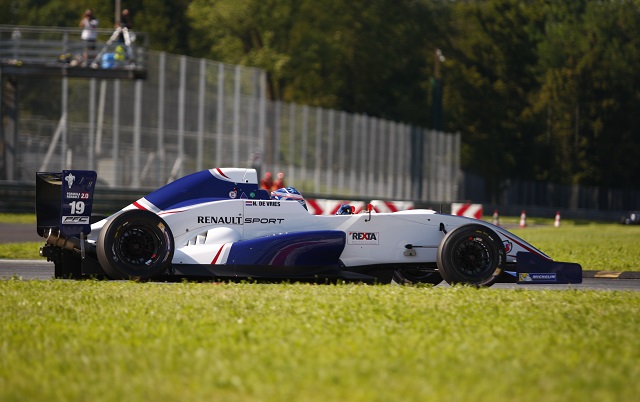 Koiranen GP’s Nyck de Vries took pole position for both races of the penultimate Formula Renault 2.0 Alps round at Mugello.

De Vries was the only driver from the latter Group A to beat the time set by Fortec Motorsports’ Group B pacesetter Charles Leclerc.

The Monegasque racer, who narrowly bested the Dutchman in both practice sessions, was unmatched in the earlier Group B, leading his category by more than a quarter of a second.

MGR’s Pietro Fittipaldi and Koiranen’s George Russell contested the spot on the second row, with the Brazilian eventually coming out on top. Russell settled for third in group, with Dennis Olsen and Hugo de Sadeleer rounding out the top five.

In the second group of qualifying, de Vries took until the final seven minutes to finally best Leclerc’s time and claim provisional pole. He would remain untroubled in the first spot, a whopping six tenths clear of second-placed Bruno Bonifacio.

The grid for race two of the weekend will be made up on second-best times. As such, de Vries and Leclerc are, again, set to lock out the front row.