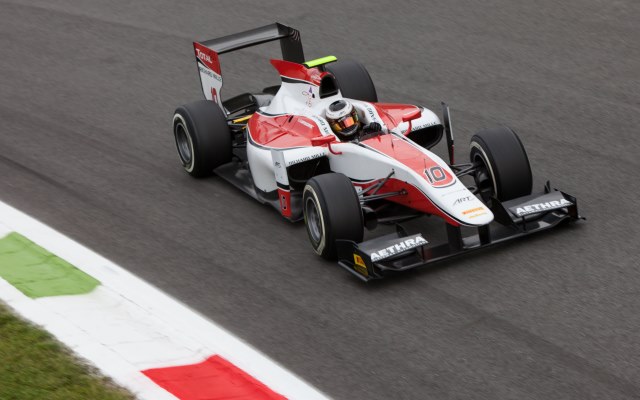 Stoffel Vandoorne scored his third win in GP2 as he took a well-managed victory from pole in the Monza feature race.

Vandoorne was pushed until the finish by fellow front row starter Arthur Pic, but the Belgian held on to win by 0.6 seconds.

Separated by little more than a second during the opening stint, Vandoorne pulled out a slightly larger margin after they swapped to the harder tyre, but once everyone had stopped and they were back at the head of the field, Pic closed the gap and applied the pressure.

Vandoorne didn’t put a foot wrong though on his way to victory, going some way to making up for the disappointment of missing out on victory at home at Spa two weeks ago.

Mitch Evans had a fairly quiet run to third place – even quieter for him as he reported having a broken radio when on the podium. The Kiwi’s biggest threat came when he rejoined the race from the pits on cold tyres in front of Stephane Richelmi, but Evans defended strongly to return to the podium for the first time since his Hockenheim win.

Richelmi’s fourth place was his best result since winning in Monaco, gaining two places off the start when both?Raffaele Marciello and?Simon Trummer bogged down.

He was followed closely by the Carlin duo of Julian Leal and Felipe Nasr during the opening stint, but while Richelmi managed to keep his place behind Evans during the stops, the South American pairing both lost ground to Daniel Abt and Andre Negrao, who had stopped early out of seventh and eighth.

Abt couldn’t make his tyres last, and was passed by Negrao into the first Lesmo. Leal went to follow him through at the next corner but failed to leave Abt enough space on the outside, and the pair banged wheels and Abt was pushed off into the gravel.

Nasr was able to use that to get past team-mate Leal at Ascari, but finished 0.4 seconds short of fellow Brazilian Negrao, who took his third consecutive points finish in fifth.

After going from 14th to ninth on the opening lap, Marco Sorensen went late into the race on the harder tyre before stopping, rejoining in seventh. Stefano Coletti followed the Dane and rejoined from his stop in eighth, ahead of Leal and Jolyon Palmer, who had started last after being excluded from qualifying for not having the required amount of fuel left in his car.

Championship leader Palmer was able to pass Leal for ninth just at the Colombian was handed a drive-through penalty for forcing Abt off track, and then went on to take eighth away from Coletti at Variante Della Roggia. Setting the fastest lap of the top ten finishers and therefore collecting two bonus points, Palmer scored just two fewer points than title rival Nasr, and thus remains 30 points ahead and starts the sprint race from reverse grid pole.

Coletti held on to finish ninth under attack from Johnny Cecotto, who recovered from a poor qualifying and grid penalty that left him starting 23rd to finish tenth.

Spa winner Marciello was eliminated from the race in a scrappy start to lap two, where Kimiya Sato went too hot into the first chicane and tagged Daniel De Jong, while Rene Binder tapped Takuya Izawa at the second apex, forcing Marciello into the gravel.