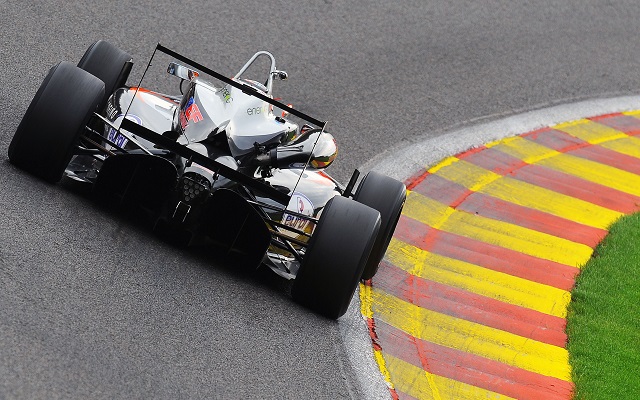 Thai racer Sandy Stuvik extended his championship lead after celebrating his seventh victory of the 2014 Euroformula Open season in race one at Spa-Francorchamps.

Throughout the race, the drivers had to deal with mixed conditions because of light rain in certain parts of the track.

However, most of the surface was not wet enough to gain any advantage from rain tires, so those who eventually switched to them, including usual EF Open frontrunner Artur Janosz, were eliminated from the battle for the top positions.

The first half race saw an enjoyable battle between Stuvik and Alex Palou with several overtakes for the lead. However, as the race went on, Stuvik managed to build up a healthy lead, breaking the slipstream from the Spanish racer, which allowed him to pull away and eventually secure the win.

Palou, who still remains a major player in the title fight, settled for second, picking up his sixth top-two finish in a row.

For a brief moment in the race, Team West-Tec’s Yarin Stern was also part of the battle for the lead, running in third. However, the West-Tec driver retired due to a spin on lap five.

As such, Dzhon Simonyan held on to his first podium of the season despite coming under big pressure from series returneee Alex Toril on the final lap.

Saud Al Faisal recorded his best finish of the season in ninth with the top ten completed by Yu Kanamaru.