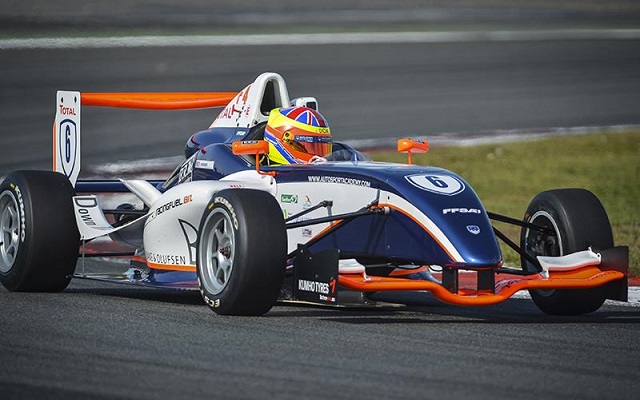 Sophomore French F4 driver Felix Hirsiger celebrated his long-overdue maiden victory in race one of the fourth round of 2014 at Magny-Cours.

The Anglo-Swiss driver kept championship leader Lasse Sorensen at bay to convert his second pole into a career-first win.

Sorensen stayed within a second of Hirsiger at all times in the race, but could not find a way past him, despite slashing the gap to just 0.3s in the final minutes.

With the leading duo pulling away from the rest of the field relatively early on, it was Dorian Boccolacci who led the fight for best of the rest.

The Lotus junior held off Australian Joseph Mawson over the opening laps and was given some breathing room when Mawson himself came under pressure from Valentin Hasse-Clot.

The fight between the Frenchman and the Aussie eventually resulted in them going side-by-side into a chicane, with Mawson sticking to the inside line. The Australian then got slightly loose and Hasse-Clot inadvertently hit him in the back, damaging his own front wing.

From that point on, Hasse-Clot, who was chasing his best finish of the season, fell down the order, while Mawson was soon back on Boccolacci, eventually finishing just a few tenths off the podium.

Hasse-Clot nursed his damaged car home in seventh, ahead of Russians Vladimir Atoev and Denis Bulatov, with Erwan Jule rounding out the top ten.