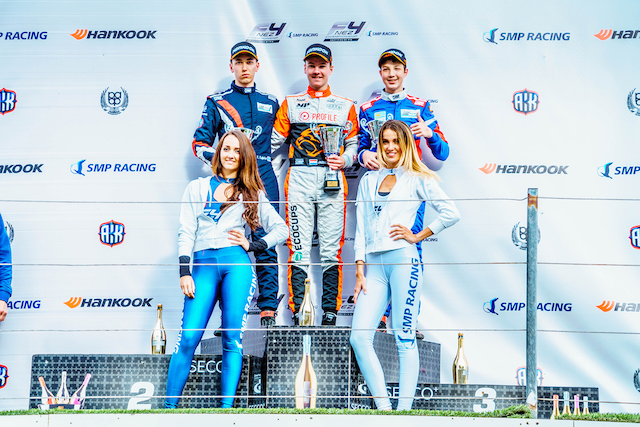 Jarno Opmeer increased his lead in the SMP Formula 4 standings with victories in both Sunday races at home at Zandvoort.

Third on the grid for race two, Opmeer gained a place off the start when?Richard Verschoor stalled from P2 and then took the lead away from race one winner?Tuomas Tujula on the second lap.

Juho Valtanen followed him past Tujula a lap later and quickly slashed the gap to Opmeer. A very close battle ensued, and a mere 14 thousandths of a second separated them at the finish.

Tujula was just half a second back in third, while?Danny Kroes was a lonely fourth.?Rasmus Markkanen just held off?Alex Vartanyan for fifth, with Verschoor fighting back to seventh after falling to 17th.

On the day that fellow Dutch Red Bull driver Max Verstappen took a shock F1 win, new Red Bull Junior Verschoor had a frustrating day. He claimed pole race three and led for eight of the 12 laps before serving a drive-through penalty for a jump start, which with the majority of the race run behind the safety car meant he finished 13th.

“After I finished I went to race control and they said I had moved at the start as the third red light came on,” said Verschoor.

“I didn’t even realise I had moved, was just feeling for the biting point of the clutch, I didn’t jump the start. They said I had only moved a bit but it was enough for them.”

Opmeer benefitted to take the win ahead of Tujula and Vartanyan. Opmeer’s points tally is up to 98, with Vartanyan on 56, Tujula on 53 and Verschoor on 42.

SMP F4 will be back at Zandvoort on 3-5 June for the Max Verstappen Race Days with a large crowd likely.