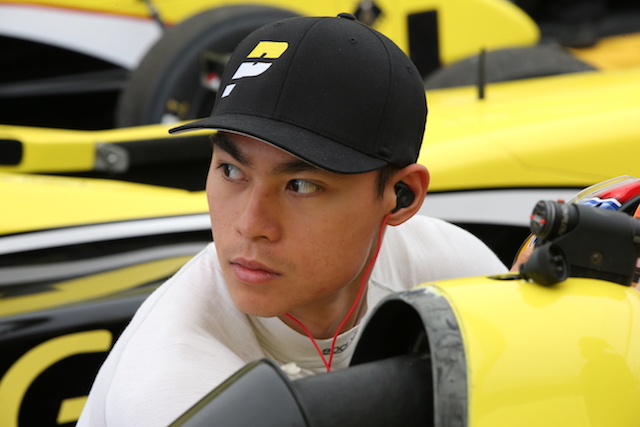 Tan occupies the car that started the season in the hands of?Raoul Hyman and which should have been raced by?Nelson Piquet Jr in Pau had his entry not been rejected.

Tan finished fourth in the Pro Mazda standings in his rookie season in 2015, but a switch from Andretti to Pelfrey for this year did not work out and he parted with?the team after the opening two rounds of the season.

It’s a return to F3 for the former protege of Tony Fernandes, having come fifth in the German series in 2014.

“Obviously my goal is?to come here and learn as much as I can;?progression is absolutely key,” he said.

“I don?t have any expectations, these guys have already done loads of testing and three race events already so already have a lot more mileage than me. ?I?m focusing on doing as much as I can and hopefully doing a good job for the team.”

Team boss Trevor Carlin added: “We were able to watch his progress pretty closely last season in the Pro Mazda Series which runs on the Mazda Road to Indy alongside Indy Lights.

“He has a great attitude both in and out of the car and I?m very pleased we finally have chance to work together.

“It will be a tough learning curve for Weiron this weekend; adapting back to an F3 car against drivers that have been preparing and racing in the series for several months, but if he focuses on making steps forward with every session, we?ll be very pleased.”

Tan was slowest of those to take part in the two free practice sessions on Friday morning, in which?Joel Eriksson posted the best lap.