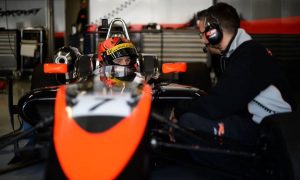 Jannes Fittje will return to Euroformula Open this season, moving from RP Motorsport to Drivex School.

The 18-year-old German has been contesting the EF Open Winter Series with the Spanish team, finishing third and fourth in the two races held at Paul Ricard.

Last year he appeared on the podium four times, including a best of second to championship dominator and team-mate Harrison Scott in the chaotic second race at Monza. He entered the first five rounds of the season with Fortec Motorsports, with whom he took two of his podiums.

He previously raced in ADAC Formula 4, finishing seventh in the standings in 2016.

“The team did a great job the last two seasons and hopefully this year we will fight for the championship together.

“Now we have to focus on the next test days to get better than everyone.”

Fittje is the third driver to sign for Drivex, after Christian Hahn and Lukas Dunner.

?I?m proud to welcome Jannes. He is a talented driver and definitively another great addition to our team in the series,”?Miguel ?ngel de Castro, team principal of Drivex, said.

“We started working together at Paul Ricard and became clear he is a quick learner.

“We made excellent progress both days and everybody is already looking forward to working together again and prepare an exciting new season, which I expect to be very successful with our trio of drivers.?