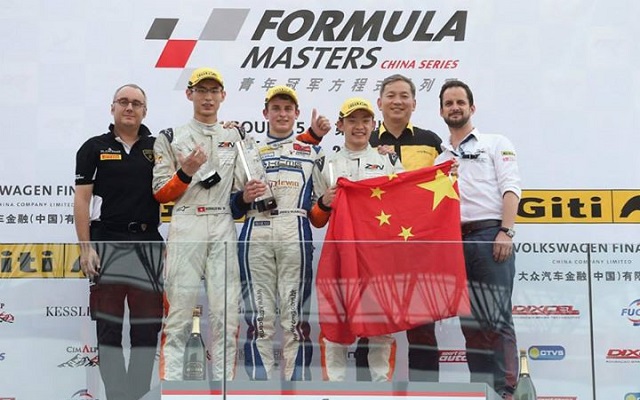 Championship leader James Munro took his seventh victory of the season in the first race of the fifth round of the 2014 FMCS season at Zhuhai.

The 17-year-old Kiwi managed to qualify only fourth, but following a strong start, was up to second by the end of the first lap. He ended the race in second place on the road behind polesitter Jake Parsons, but the Aussie was handed a 30-second penalty owing to a jump start, promoting Munro to the top step of the podium.

Yuan Bo, who started alongside Parsons on the front row, was third provisionally, but he too received a similar penalty for the same infraction, dropping him to twelfth place ultimately. The penalties promoted Zen Motorsport drivers?Ronald Wu and Yin Hai Tao into second and third places.

Championship contenders Matthew Solomon and Dan Wells retired from the race in separate incidents on the first lap of the race, allowing Munro to extend his championship lead to 34 points over Solomon.

Yin Hai Tao will start on pole for race two tomorrow, having taken the fastest lap in race one. The postponed third race of the opening weekend of the championship in the series’ first visit to Zhuhai, is also set to be held this weekend.