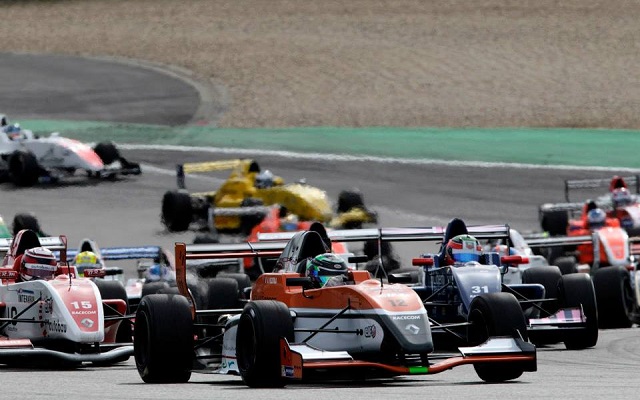 A week after his victory in the Eurocup series, Manor MP’s Andrea Pizzitola continued his winning ways in race one of the Formula Renault NEC title decider at the Nurburgring.

Starting from pole, Pizzitola held on to his lead off the line while Seb Morris climbed up to second after overtaking both Louis Deletraz and Kevin Jorg.

Throughout the race, Morris didn’t let Pizzitola build a healthy gap, but also could not get within less than a second of him, allowing the Frenchman to eventually take the checkered flag.

Josef Kaufmann’s Jorg completed the podium, while championship leader Ben Barnicoat extended his points lead with a fourth place after a move on his rival Deletraz.

Having then lost two more positions to Ukyo Sasahara and Jake Hughes, Deletraz had to settle for seventh.

With two more races left in the season, five people remain with a chance at the title. Barnicoat leads by 15 points over Deletraz, while Morris and Schothorst are tied at 32 behind. Finally, Sasahara is 59 points adrift, with 60 available over the remaining races.

UPDATE: Gustav Malja received a post-race penalty of 30-seconds, which demotes him from tenth to 20th.