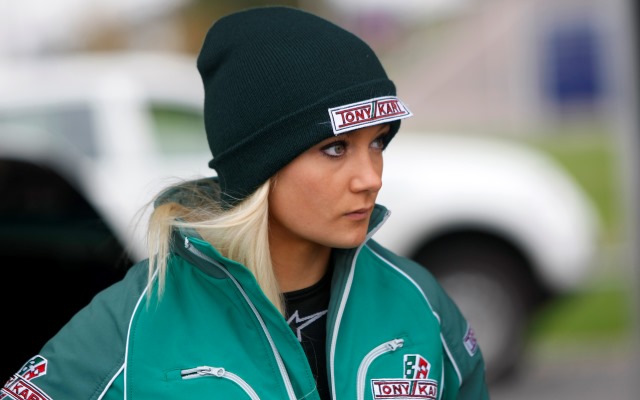 Former karting champion Jessica Hawkins will make her single-seater debut in the penultimate Formula Ford GB round at Silverstone next weekend.

The 19-year-old will join the MBM Motorsport team alongside their existing drivers Ashley Sutton and Michael O’Brien.

Hawkins was runner-up to current Formula Ford points leader Harrison Scott in the Super 1 National Honda Cadet Championship in 2007 and won the British Open Championship in the same class in 2008.

In 2011 she was second in the Kartmasters British Grand Prix in the Rotax Junior class to Jack Barlow (who began the Formula Ford season with MBM under their previous guise of Jamun) and was third in the same event in the KF3 class in 2012.

Her only previous car racing experience has come in the Clio Cup Road Series, in the Autumn Cup at Rockingham last November and at Brands Hatch in July, but has previously sampled MBM’s Formula Ford machine.

?I tested the car at Silverstone a couple of months ago, and at the time I joked about making a guest appearance in the championship,” said Hawkins.

“Then a sponsor came to me and said he wanted me to do it, which was absolutely fantastic news. I?m a real novice: I?ve only ever had two races in a car and this will be my first in a single-seater so I am still learning the basics. The aim is to try to get a half-decent result and go from there; I?d love to use this as a springboard to a drive in MSA Formula for 2015.?

Hawkins becomes the second female racer on the Formula Ford grid, joining Louise Richardson who scored her best result yet of fourth last time out at Rockingham. Richardson will be joined at her family team for Silverstone by the returning Ovie Iroro.