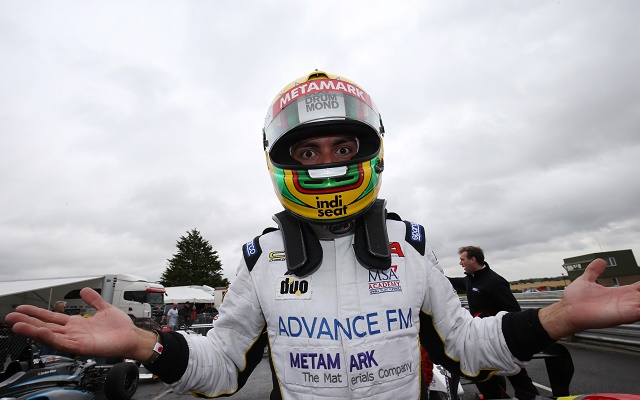 Chris Dittmann Racing’s Tom Jackson kept his cool in a chaotic second race of BRDC F4 at Snetterton, taking the win from sixth on the grid.

Jackson, who had also won the reverse-grid race during this year’s first Snetterton round, was the benefactor of contact between Will Palmer and Chris Mealin as they fought for the lead.

At the start. front row duo Akhil Rabindra and Rodrigo Fonseca immediately came to blows and, in resulting chaos, it was Mealin who stormed into the lead from ninth.

Jackson was up to second as the safety car came out, but lost out to Palmer after the restart.

But the HHC man, having looked to set up his first BRDC F4 hat-trick, was out of the race early after coming together with Mealin at Agostini, the Lanan driver slipping behind Jackson.

The Kent driver needed no further invitation to escape with the win, while Mealin held off Harri Newey for second place.

Al Faisal Al Zubair recorded his best finish of the year in fourth, keeping Omar Ismail behind by one tenth of a second.

Jordan Albert passed Ciaran Haggerty late in the race for sixth, with Haggerty nursing a damaged front wing home to seventh, just ahead of Jack Lang and Jack Bartholomew.

The top ten was rounded out by Zubair Hoque.

Palmer, despite his retirement, will start race three from pole due to his best lap from Saturday’s race. Teammate Newey will line up alongside.

UPDATE: Chris Mealin has been excluded from the results of the race due to aggressive blocking on Will Palmer on the start-finish straight. As such, Harri Newey moves up to second, while Al Faisal Al Zubair picks up a maiden podium.