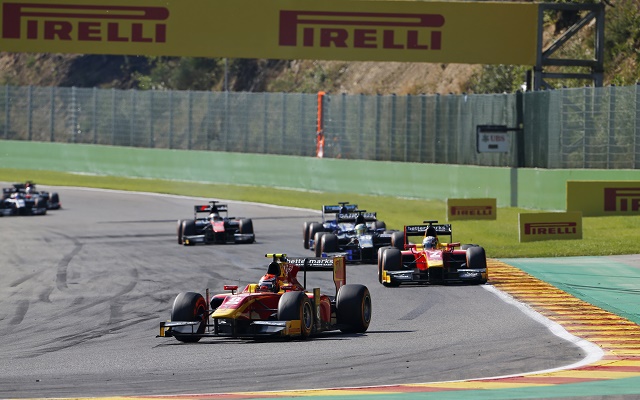 GP2 frontrunner Alexander Rossi claimed an overdue first win of his 2015 campaign, leading every lap of the second race at Spa-Francorchamps.

Rossi beat teammate Jordan King to win for the first time since the 2013 Abu Dhabi feature, while the Briton took his first podium and propped up a Racing Engineering 1-2.

King, starting from reverse-grid pole, had kept the lead off the line, but came under pressure from Rossi through Eau Rouge and eventually had to defend into Les Combes.

He tried to block and initially held position, but ran wide exiting the corner and allowed his teammate through into the lead.

The duo then ran a second apart over a largely uneventful first stint, while championship leader Stoffel Vandoorne was making up ground behind, eventually settling into fourth behind Nat Berthon.

As the race approached and passed halfway point, Vandoorne briefly came under pressure from Mitch Evans, but weathered the storm and then caught and passed Berthon for third.

The Kiwi followed him past the Frenchman shortly thereafter.

Vandoorne then got within DRS range of King, but a subsequent late off by Arthur Pic in the gravel brought out the virtual safety car.

The restart that followed shortly thereafter was mastered by Rossi, while Vandoorne massively locked up into Bus Stop on that lap, coming under pressure from Evans.

This put both Rossi and King in the clear, with Racing Engineering’s red-and-yellow cars easing to a 1-2, a second and a half apart.

Slowly but surely reeling the Belgian in, Evans lined up and completed a pass round the outside of Les Combes on the final lap to claim a podium finish.