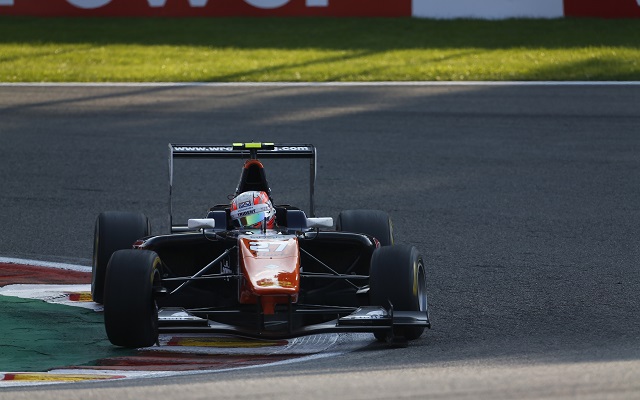 The Italian was down one spot off the line after starting in fourth, but found himself in the lead in no time, slipstreaming past?the leaders in just three laps.

The Polish driver’s race?was far from smooth though as he quickly dropped down the order following a poor start.

In addition, he was investigated for starting out of position but, before he could receive any sanctions, Bosak suffered a big incident at Blanchimont.

The Arden driver lost control of his car due to a seemingly contactless puncture and crashed into the wall.

During the impact, a wheel got loose and returned the to track, crossing Matt Parry‘s path and breaking the Welshman’s front suspension.

At the front, Alex Palou had been into the lead off the line, with Esteban Ocon fighting his way up to second by the end of the Kemmel straight.

The safety car, which had paid an inevitable visit after the crashes, reappeared soon after the first restart, following a collision between Marvin Kirchhofer and Antonio Fuoco.

The Italian was set to take fifth from the ART driver on the outside of Les Combes but Kirchhofer stuck to the inside line and ended up hitting Fuoco off.

Losing control of his car, Fuoco spun back to the track and hit Kirchhofer, which saw the end of the German’s race as well.

After the second restart, Ghiotto continued to make up ground. He had already been third after passing Alfonso Celis and the Italian got past Ocon with ease as well.

In the following lap, Ghiotto got ahead of Palou on Kemmel to claim the lead. He immediately pulled away from the Spaniard, who lost another position to Ocon quickly afterwards.

There was no catching Ghiotto though as the Italian cruised to the checkered flag to take his third victory of the season.

Ocon finished second, for the fifth time in a row, while the podium was completed by fellow ART driver Celis.

The Mexican, celebrating his maiden podium finish in the category, overtook the dropping Palou, who ended up fifth.

Fourth was taken by Matheo Tuscher, the Swiss completing a masterful race after starting way down the order.

Yesterday’s race winner Emil Bernstorff had to retire early in the race, having been hit at La Source on lap one.