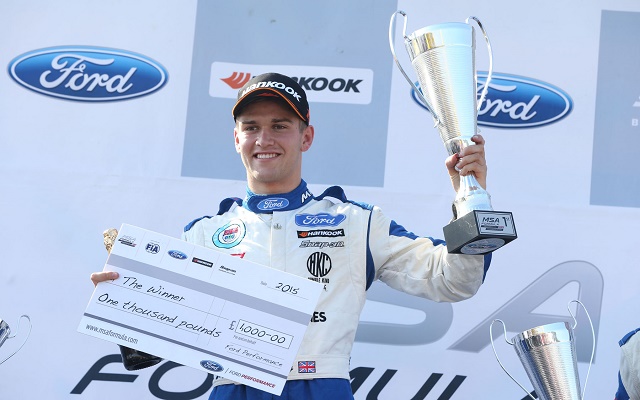 Sennan Fielding was victorious?at Knockhill in an MSA Formula race two which had two safety car periods and a last-lap change in the lead.

Starting from sixth on the reversed grid, Fielding gained two places at the start to slot in behind pole-sitter Dan Ticktum, Josh Smith and Colton Herta.

The safety car made an appearance at the end of lap one, in order to clear the beached cars of first-lap retirements Jessica Hawkins and Tarun Reddy.

There were no changes at the front after the restart but the race was neutralized again soon.

The culprit was championship frontrunner Lando Norris this time, whose car was stuck in the gravel following a spin.

Once going back to green, contact between Smith and Herta allowed Fielding to sneak into second. Herta managed to retake the position temporarily but?Fielding was soon back through, set to finish the race as runner-up.

That all changed however, as Ticktum, who was leading by three seconds at that point, lost drive on the final lap and was forced into an early retirement, with several drivers crashing behind.

As a result, Fielding won the race ahead of Herta and Smith.

The top ten was completed by Rafa Martins, Jack Butel and Ollie Pidgley.

Palmer bounces back to claim eight win at Snetterton