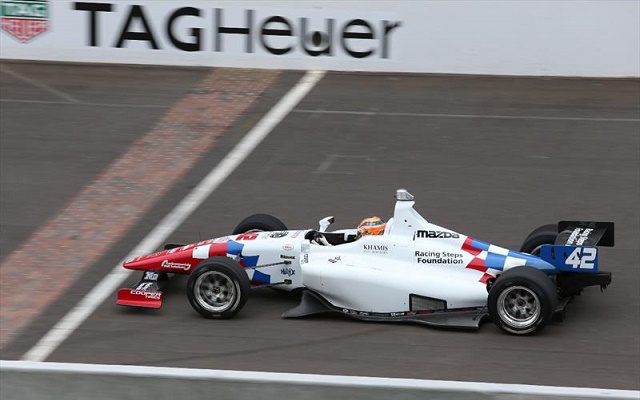 Harvey spent most of the race running in tandem with Schmidt Peterson Motorsports teammate Ethan Ringel, the rookie pole sitter making his very first superspeedway oval start. After Harvey made the first strike by passing Ringel into turn 1, the two spent the opening laps?battling for the lead before settling into a single-file groove mostly led by Ringel, who headed 30 laps of the 40-lap sprint.

After the first ten laps, Schmidt Peterson Motorsports had assumed the top four places in the running order, with Scott Anderson moving up through the field using the high groove to his advantage, and rookie teammate RC Enerson making his way up the order with him.

Not taking part in any of the action was Formula 1 veteran Max Chilton, who didn’t even make the green flag in his first oval race due to an undisclosed mechanical issue. By the halfway point, he would be joined by?Felix Serrales, who also retired after 19 laps due to a mechanical failure – denying Belardi Auto Racing their third consecutive Freedom 100 victory as his teammate?Juan Piedrahita eventually finished a quiet seventh place.

Harvey would continue to show his patience by staying behind Ringel as the two began to separate themselves from the lead two cars. They would occasionally swap the lead, using the powerful slipstream effect to their advantages. As the race wore on, concerns over tyre wear started creeping up as some drivers began to lose pace.

With seven laps to go, Harvey would make the move of?the race as he used the lapped car of struggling championship contender?Spencer Pigot as a pick to get around Ringel into turn one. Behind them, Anderson passed his rookie teammate Enerson to move into the third spot, though by then they had lost touch with their teammates in first and second.

As the leaders crossed the line with three laps to go, Ringel got a massive tow on Harvey and was moving to the outside to pass when the race’s only caution flag came out, as the Carlin car of?Ed Jones blew a tyre in turn four and crashed left-side first at the exit of the corner. Jones was unhurt – a relief given his bad luck with injuries in European Formula 3 one year ago – but would lose more championship points on what proved to be a difficult day for Trevor Carlin’s team at their first run at the superspeedway.

The race ended under caution, with Harvey taking Schmidt Peterson Motorsports’ eighth victory in 13 runnings of the Freedom 100, the Briton himself moving into the points lead over Pigot and Jones. SPM held onto their 1-2-3-4?result with Ringel finishing 2nd on badly worn tyres, Anderson holding onto third, and Enerson fourth.

Kyle Kaiser finished fifth, ahead of?Sean Rayhall, who split the winnings at the Indy road course with Harvey two weeks ago,?but slid?from third on the grid. Piedrahita took seventh ahead of?Shelby Blackstock in eighth, while Pigot?finished a lap down in ninth, with Jones classified in tenth despite his late crash.