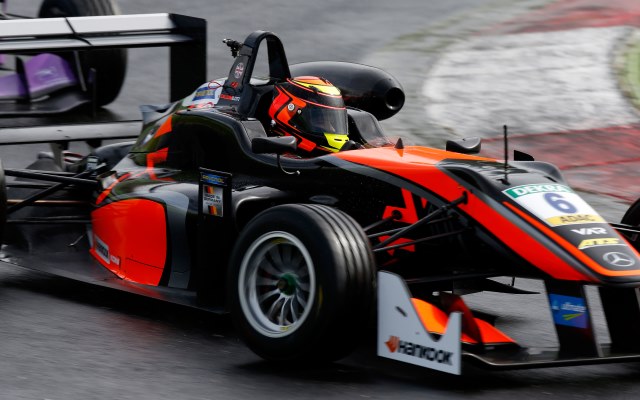 After a rain-lashed first day, the F3 teams had a dry day of running on Friday, with Carlin pair Alessio Lorandi and Ryan Tveter leading the way during the morning session.

The Italian’s time made him the first driver below the 1m28s mark during the test.

Ilott, who transferred in the opposite direction to his former karting rival Lorandi over the winter by moving from Carlin to Van Amersfoort Racing, went ahead towards the end of the afternoon, displacing team-mate Pedro Piquet.

Piquet, who is continuing to use a livery inspired by the Brabham BT49 his father Nelson used to win the 1981 Formula 1 world title like he did in Brazilian F3, took third with Lorandi fourth.

Anthoine Hubert, still in his early F3 miles after his VAR deal was announced at the start of the week, was fifth ahead of Tveter and Prema’s lead driver Lance Stroll.

Arjun Maini was ninth in the sole T-Sport car with Motopark’s Joel Eriksson and Niko Kari rounding out the top 10.

One day of official pre-season testing remains, at Paul Ricard on 31 March ahead of the opening race weekend at the same circuit.