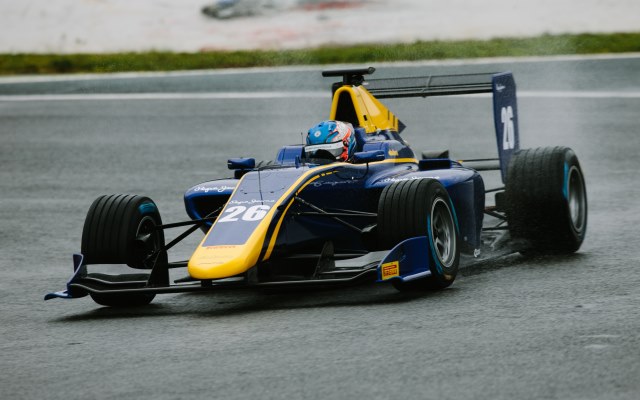 GP3 teams have run the championship’s new-for-2016 car for the first time in a two-day shakedown test at Magny-Cours.

A total of 825 laps were completed by the seven teams across the rain-affected test in France, with each team running one car.

Series newcomer DAMS was the first team to get out on track on Wednesday morning with Jake Hughes (pictured).

The majority of drivers with deals confirmed for the 2016 season got behind the wheel of their team’s cars, along with three others.

Ex-Formula 1 driver Giedo van der Garde put the first miles on the Campos car through his close links to the Spanish team and its new driver?Steijn Schothorst.

Ralph Boschung was out with his 2015 team Jenzer Motorsport alongside its only confirmed signing Akash Nandy.

Mahaveer Raghunathan tested for Koiranen in addition to Matt Parry and Matevos Isaakyan. The Indian has been expected to be announced as a race driver for the team imminently.

The shakedown gave the teams the opportunity to run the cars prior to the first official pre-season test at Estoril on 22-24 March.

“The shakedown has gone very well, even better than we even expected,” said series technical chief Didier Perrin.

“We have been limited by the weather conditions; if the weather had been better we would have completed even more laps, however we are very pleased to get 825 laps completed over the two days.

“We experienced only a few issues and we know how to fix them prior to the first test in Estoril.

“The shakedown played its role with the teams confident in knowing how to operate the car.? Now they will be able to focus on the performance of the drivers at the test session later this month.”