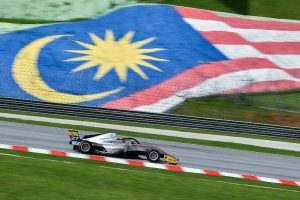 Pinnacle Motorsport driver Lawson continued to be untouchable, belying his lack of F3 experience to beat Super License’s Tomoki Takahashi by 4.101 seconds. The Japanese driver did beat Lawson off the line, but the New Zealander had the inside line for Turn 1 and retained the lead.

The race was then stopped due to incoming rain, with everyone returning to the pits and switching to wet tyres. On the restart Lawson escaped immediately, with Takahashi leading Absolute Racing’s Yifei Ye and Jaden Conwright, and Hitech GP’s Hyman, who had overtaken team-mate Harrison Scott to move into the position he needed for the title.

A spin for Jeremy Wahome, which beached him on a kerb, meant the race went back under safety car conditions, during which Ye also dropped down the field. When the race got underway again Scott moved back past Hyman, but with the South African still being in fifth it meant he beat the absent Jake Hughes’ points tally to take the title.

Fourth place for Scott was his best result of the weekend, but marked a disappointing return to F3 for the 2017 Euroformula Open champion. In comparison, a third win out of three for F3 rookie Lawson meant he ends the season eighth in the standings.