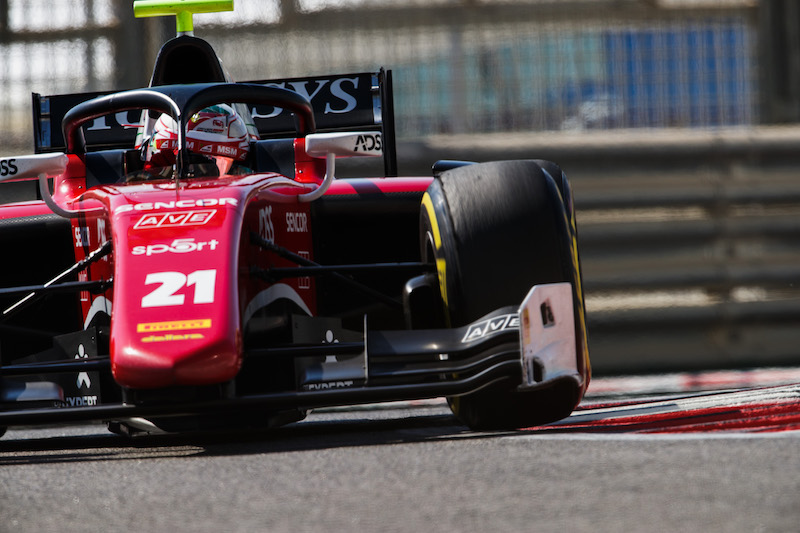 Antonio Fuoco took victory in the final race of the Formula 2 season in Abu Dhabi, as Lando Norris clinched the championship runner-up position by taking second place on the last lap.

Charouz driver Fuoco took the lead at the start ahead of pole-sitter Roberto Merhi, and after an early virtual safety car period, was never challenged on his way to his third F2 sprint race win.

Norris lost out to a fast-starting Nyck de Vries at the beginning of the race but immediately attacked the Prema driver, who locked up and ran deep at Turn 11 and managed to give up position to Norris while staying ahead of newly-crowned champion George Russell.

Norris spent the rest of the race trying to get past Merhi, without the aid of the Drag Reduction System which was unavailable to the field for most of the distance.

The Carlin driver finally got by the Campos man on the last lap, forcing Merhi into a huge lock-up and running deep at Turn 8 in a last-ditch defence.

Even without that extra place, Norris would have finished as championship runner-up at the expense of Alex Albon, snatched the final point late on from Luca Ghiotto having started 14th following his feature race stall.

Norris went on to spin across the pit straight after crossing the finish line as he waved to his team.

Russell overtook de Vries for fourth on lap seven of 21 but couldn’t stay in touch with the podium battle.

Louis Deletraz started just behind team-mate Fuoco in third but fell to sixth after a poor getaway.

Artem Markelov also lost places at the start but recovered as far as seventh, but went off the road on multiple occasions in his attempts to find a way past Deletraz.

Sergio Sette Camara stalled for the second race in a row, triggering an aborted start, but fought back to 10th from the pitlane.

Sean Gelael caused the virtual safety car on the first lap of the race when he tangled with Niko Kari and Tadasuke Makino at Turn 14, forcing all three out of the race.