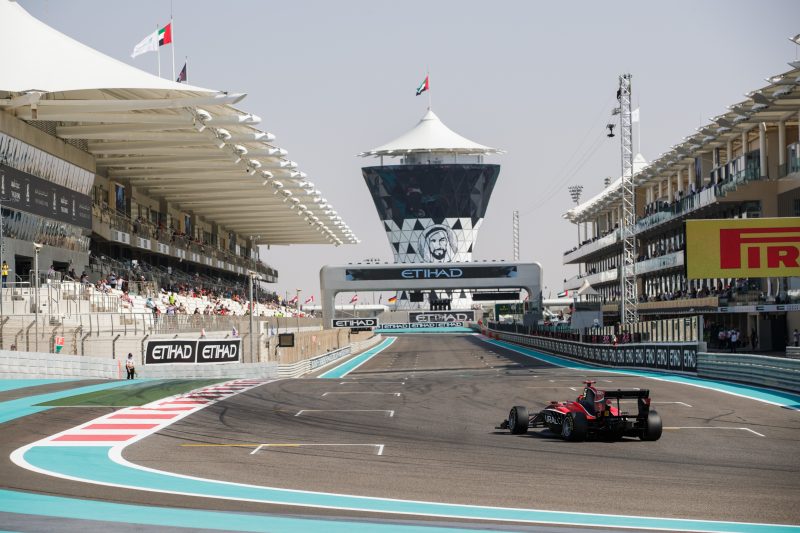 ART Grand Prix’s Nikita Mazepin sealed victory in the 150th and last GP3 Series race at Abu Dhabi, with the top 10 cars covered by less than 10 seconds at the chequered flag.

Championship runner-up Mazepin occupied second place behind polesitter Juan Manuel Correa in the closing stages of the race, after passing Jake Hughes around the outside of Turn 1 at the start and dispatching Guiliano Alesi at mid-distance.

However, Correa’s chances of victory were dashed when the stewards handed him a five-second time penalty for failing to respect the prescribed speeds during a virtual safety car period following a chaotic lap one. Running in second place at the time, Alesi was hit with the same penalty.

Despite defending his track position for 13 of the 14 laps, Mazepin was able to seize the lead away from the Jenzer Motorsport driver on the final lap.

The move put a car between Mazepin and his team-mate Jake Hughes, who threatened Mazepin in the closing stages. With Correa’s penalty demoting him to sixth place, Hughes secured second.

Campos Racing’s Simo Laaksonen charged from ninth on the grid to finish on the podium in third. He twice exchanged places with ART’s Callum Ilott in the final four laps, with the duel being decided on the penultimate?tour. Ilott finished fourth to ensure four ART’s ended up in the top four.

The fourth ART entry of the newly crowned champion Anthoine Hubert retired in a chaotic opening lap. Hubert was sandwiched between Saturday’s race winner Leonardo Pulcini and Trident’s David Beckmann at the end of the back straight.

Beckmann’s rear suspension folded in the contact and Hubert’s front suspension was broken on both sides of the car. Pulcini was able to continue but he finished 12th

Richard Verschoor, who ended up finishing in seventh, was involved in a separate lap one incident where he tagged Pedro Piquet into a spin. Jannes Fittje hit the stranded Trident and the two became lap one retirees.

The attritional nature of the race helped Ryan Tveter into an eventual fifth place finish. He battled Alesi for track position late on, with the Frenchman’s VSC penalty demoting him to 10th.

Tatiana Calderon rounded out the points finishers in eighth place, with Joey Mawson climbing from last on the grid to finish ninth for Arden International. Lapping faster than the leaders late on, he finished just 7.9 seconds behind winner Mazepin.