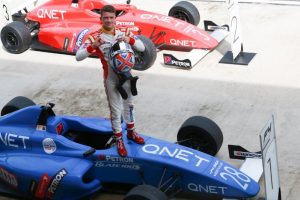 The Frenchman started race one from third, but took advantage of a poor getaway for poleman Kane Shepherd to end the first lap in the lead. Shepherd gradually tailed off in second, and had to fend off a last lap attack from Muizz Musyaffa, who set fastest lap.

Ghiretti had another strong first lap in the reversed grid race two, making his way up to second. Poleman and British F4 regular Lucca Allen was harder to overcome, but Ghiretti managed to overhaul him at Turn 5 on the fourth lap. Allen finished second, his first top five finish in two seasons of car racing, and returning driver Adam Khalid was third. Shepherd had to retire with car trouble early on and Musyaffa came off worse in a tussle with top Danish F4 rookie Malthe Jakobsen, damaging a rear right wheel.

The final race was shortened due to a lengthy safety car period. British rookie Emily Linscott?s car was stranded in the middle of the track at the first corner, having come together with Khalid and Ryo Komikado, with Komikado the only one able to continue.

Ghiretti made an excellent restart once the safety car period was over, and found himself battling for the lead with Shepherd. The Thailandi couldn’t force a move though, meaning Ghiretti has the title wrapped up with three races to spare.

Musyaffa completed the podium, and an extra point for fastest lap means he’s he’s unlikely to lose third in the standings to fourth placed Alister Yoong in the final round of the season.

Formula Academy Sudamericana returned to Londrina over the weekend, and Nathan Brito doubled up once again.

Championship leader Juan Vieira took pole in the wet, with similar conditions plaguing the first race. Vieira lost the lead at the start to Brito, who used the lack of spray to take a dominant win by 19.660 seconds. Leandro Guedes, Vieira’s main title rival, and Bruna Tomaselli were the only other two finishers.

Although drier, the second race was no easier. There was a high level of attrition, and Bruno Testa led Brito under the safety car going into the penultimate lap. The leader, who is ending a nine year break from racing, left a gap going into the first corner on the restart though, and Brito swept past to take his fourth win of the season by half a second.

Guedes, Tomaselli and Vieira were several laps down, but crucially all classified, meaning Vieira heads into the final round of the season in Uruguay with a one point lead over Guedes. Brito, Tomaselli and Testa are also in title contention.
Additional reporting by Elliot Wood