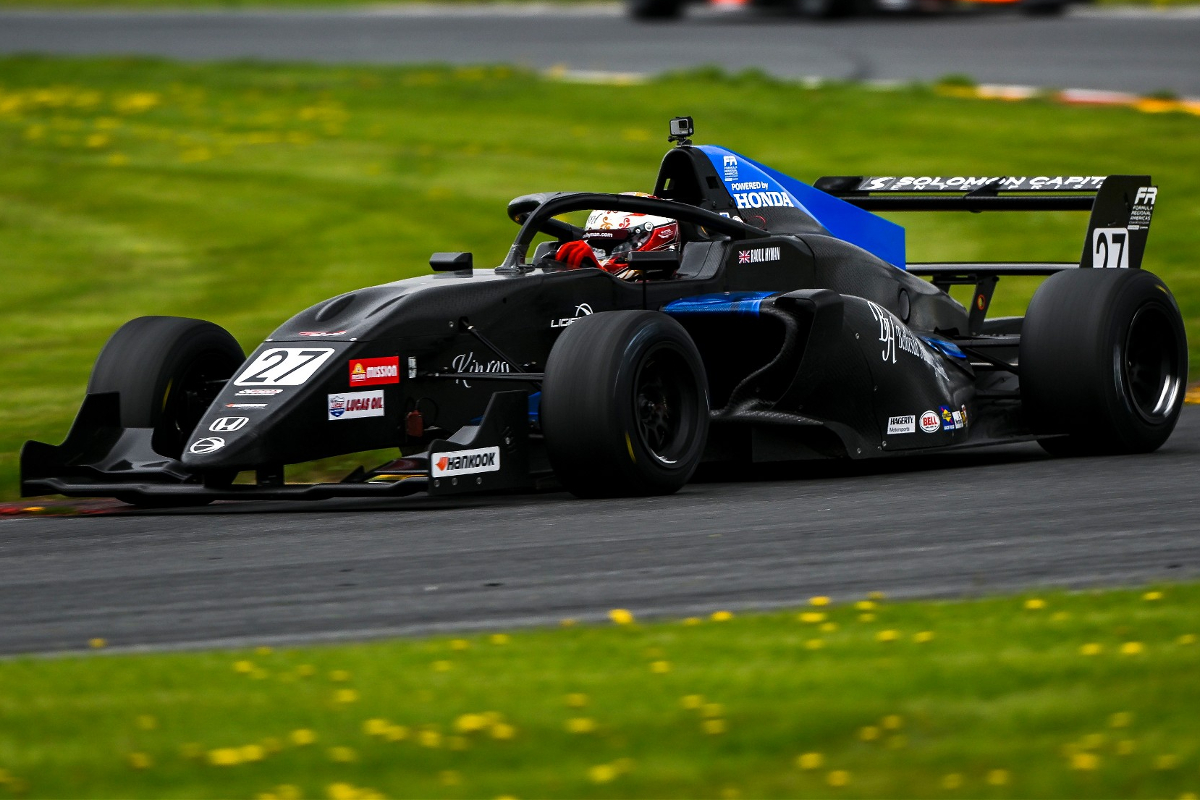 TJ Speed’s Raoul Hyman won two Formula Regional Americas races out of three at Road America to establish himself at the top of the points table.

Hyman took pole by 0.942 seconds, with Nico Christodoulou his closest qualifying opponent. However his challenge didn’t continue into race one as he stalled and was collected by Hayden Bowlsbey.

Both retired immediately, and the safety car came out. While their cars were recovered the field was told to pass through the pitlane rather than go down the pit straight, and it wasn’t until the end of lap three were they released to race again.

Hyman sprinted away, and in nine laps pulled out a 12.917-second lead to take the second win of his racing return.

Dylan Tavella didn’t have an answer to his pace but intially had a comfortable hold on second place as Mac Clark and Ryan Yardley jumped Jason Alder and battled for third.

Clark got into the podium position, only for Yardley to get back by a few corners later and set off in chase of Tavella. Alder also got back past Clark before the end of the restart lap, and while Clark did then return the favour it only bottled up the cars behind him and eventually he slid down to seventh.

Tavella secured second place despite Yardley putting him under pressure after a few laps, as overtaking proved difficult.

The fastest laps set race two’s grid, and Hyman shared the front row with Alder. The start was delayed as Bowlsbey had an incident at turn 12 on one of the formation laps and Kevin Janzen then pitted before the start too.

Eventually the drivers did actually launch from the grid, and Hyman sprinted off while three drivers battled for second place. A hefty crash for Nick Persing on lap two meant a full course yellow and then a safety car period was required.

At this point Alder led Clark and Tavella in the dispute for second, and when racing resumed Clark made a strong move to get by, while Christodoulou – who had started at the back of the grid – muscled his way into fourth.

Alder got back by Clark around the outside of turn one on the next lap, and then pulled away from Clark and Tavella’s fight over third. Hyman meanwhile romped into the distance, but with two laps to go spun off at the final corner and victory was gifted to Alder.

Hyman did at least get another chance at winning, with fastest lap putting him on race three pole. He dominated again, and Alder finished second despite a slow start as Christodoulou went off ahead of him while he was battling Tavella for second.

Alder and Persing had been running together and soon got past Tavella too, and Christodoulou finished a distant fifth. After stalling, Clark came eighth.