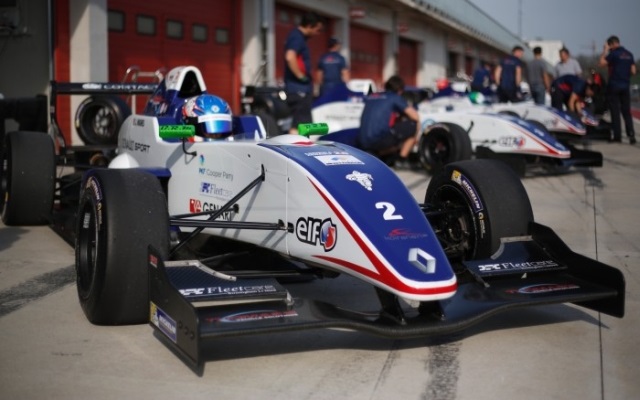 Jake Hughes will start race one of Eurocup Formula Renault 2.0 at Spa-Francorchamps from pole position.

Having topped group B by a tiny margin but unable to beat Ben Barnicoat‘s benchmark from group A – partly due to Danylo Pronenko‘s red flag-causing incident at the Kemmel straight – Hughes was originally set to start from second.

However, a four-place grid penalty for Barnicoat which he received at Aragon for causing a collision with Lasse Sorensen relegates the Racing Steps Foundation-backed driver to fifth on the grid.

As such, Hughes will occupy the first spot on the grid, while Ukyo Sasahara becomes the top driver of group A, starting from the front row.

Jack Aitken will begin behind his teammate Hughes, having been edged out by less than a tenth, with Anthoine Hubert starting alongside him.

Barnicoat drops down to fifth followed by fellow Fortec driver Callan O’Keeffe and the Josef Kaufmann duo of Louis Deletraz and Kevin Jorg.

FR2.0 veteran Ignazio D’Agosto and Matevos?Isaakyan will complete the top ten on the grid.

2014 runner-up and Aragon race winner Dennis Olsen was only eighth fastest in group B and will take up the race from 16th.