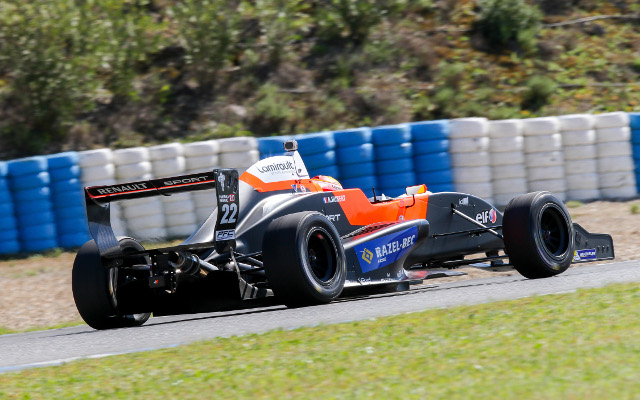 Anthoine Hubert won race one at the Formula Renault 2.0 Alps finale at Jerez as Jack Aitken claimed maximum points to cut his deficit to leader Jake Hughes to just five with a race to go.

Hubert held the lead from pole position ahead of Aitken, while Hughes followed Ben Barnicoat past Vasily Romanov for third and fourth places.

The top five then became spread out, but although Hubert quickly pulled over a second over Aitken on the way to his fourth win in five Formula Renault 2.0 Alps starts this season, the final gap between the pair was 0.972 seconds.

Barnicoat finished four seconds behind Hubert with Hughes a further 10 back.

With Hubert and Barnicoat only present as wildcards while preparing for next weekend’s Eurocup finale at the same circuit, Aitken took the maximum haul of 25 points with Hughes getting 18.

That means that Hughes’ lead over his fellow British Koiranen driver Aitken is now just five points ahead of Sunday’s deciding race. A second qualifying session on Sunday morning will determine the grid.

Five drivers had been in mathematical title contention at the start of the race but only Hughes and Aitken now remain.

Eighth place for Thiago Vivacqua behind Martin Kodric and Jehan Daruvala was not enough to cut his 37-point deficit, while his JD Motorsport team-mate Matevos Isaakyan had been within 11 points of Aitken but after climbing from 13th to 10th on the first lap he was then eliminated in a lap-two incident with Hugo de Sadeleer.

Simon Gachet and Max Defourny completed the top 10 ahead of another pre-race contender Stefan Riener, who came from a lowly 15th on the grid.