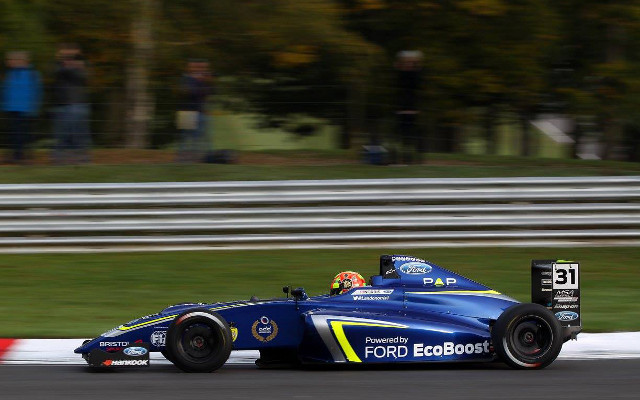 Lando Norris has moved a step closer to wrapping up the MSA Formula title with victory in the opening race of the final weekend at Brands Hatch.

Norris was challenged off the line by a great start from his Carlin team-mate Colton Herta, but Norris managed to lead into the first corner and he stayed out front for the remainder of the race.

Herta stayed close and finished within half a second of Norris but was unable to challenge for the lead.

Norris’ rival Ricky Collard gained a place from fourth on the grid but finished nine seconds back.

With Norris getting the fastest lap and a bonus point, he has now extended his championship lead to 29 points. A margin of 27 after the reverse-grid race two would be enough for Norris to secure the title.

Collard was pursued to the flag by his Arden team-mate Enaam Ahmed.

Sennan Fielding dropped out of fifth place after a black-and-orange flag called him to the pits due to a damaged front wing.

That position therefore went to Rafa Martins. Contact between James Pull and Toby Sowery relegated both down the order, giving sixth to Sandy Mitchell and seventh to Dan Baybutt.

Sowery took eighth ahead of Petru Florescu and Pull.