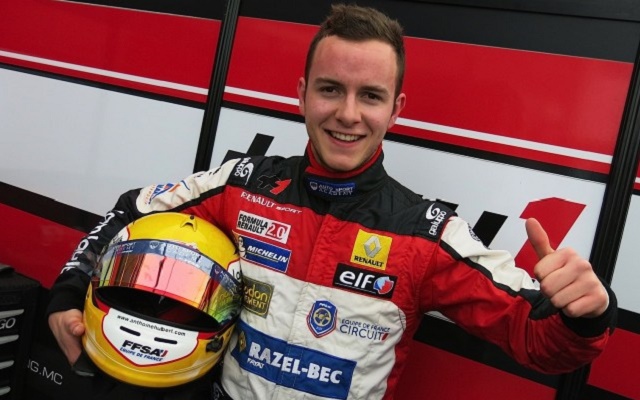 Tech 1 Racing’s Anthoine Hubert converted pole position into a confident victory in the first race of the Formula Renault 2.0 Alps season at Imola.

By taking the checkered flag in first, Hubert secured his maiden 2.0 victory and picked up Tech 1’s first Alps win since the 2012 season finale.

Front row starter Jack Aitken might have gotten a slightly better getaway than Hubert, but the Frenchman held on to the lead and would not come close to surrendering it for the rest of the race.

Over the first half of the race, Hubert established a two-second lead over Aitken and was happy to maintain it over the remaining laps.

Aitken drove a comfortable race in second, but there was plenty of action and intrigue behind, including the fight for the final podium spot. Jake Hughes held third for most of the event, only to spin out with two minutes to go, handing the place to Simon Gachet – who had also begun last year’s Alps season with a third place.

Behind the drivers running in the top four, Hugo de Sadeleer was fending off pre-season favorite Matevos Isaakyan, who finally appeared to find a way through with an audacious late-braking switch-back attempt. But de Sadeleer held on to the spot and the fighting allowed Ben Barnicoat and Denis Bulatov to close in on the duo.

Bulatov then had to call it a day with a mechanical issue in the pits and, as his compatriot and fellow SMP protege Isaakyan finally got in front of de Sadeleer, the Swiss racer bounced back to reclaim the spot.

Isaakyan then began to struggle for pace, first letting Barnicoat by and then running wide and tumbling down to P11.

De Sadeleer now had Barnicoat to deal with and held him off until the final minute, before having a moment of his own and losing time. As such, Barnicoat took fourth, ahead of a charging Stefan Riener and Martin Kodric.

Thiago Vivacqua celebrated his best finish in cars in seventh, ahead of teammate Isaakyan, de Sadeleer and Philip Hamprecht.