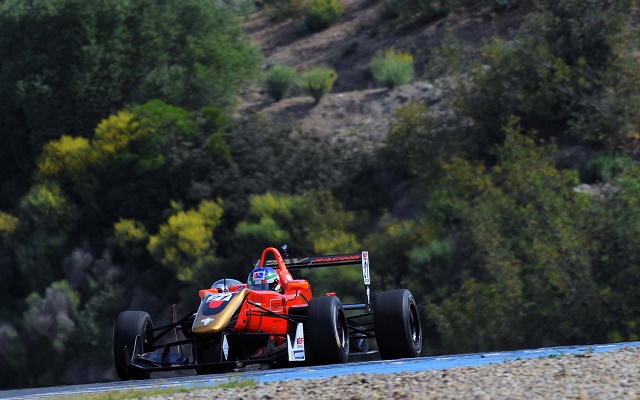 Italian driver Alessio Rovera took an improbable victory in the first Euroformula Open race of 2015 at Jerez after starting 13th.

Rovera, who was a last-second signing for DAV Racing, stayed out of the carnage to put himself in a position to challenge for the win and made the most of the chance.

Poleman Yarin Stern came to a near halt off the line and dropped all the way back to fifth, albeit gaining one spot back when fellow pre-season favorite Yu Kanamaru spun out into turn one.

Front row starter Vitor Baptista was into first at the start, but it was Tanart Sathienthirakul who seemed most comfortable on the damp track, passing the Brazilian debutant for the lead early in the race.

Rovera, meanwhile, was overtaking cars one after the other and, by the time safety car came out for the stopped F312 of Juan Manuel Vilalta, the Italian had made it up to second place.

At the restart, Rovera kept in touch with the Thai racer, but it took him several laps to mount a proper challenge. Going into the final minutes of the race, he cleared Sathienthirakul round the outside into turn one and stormed off into the distance.

After dropping down the order early in the race, Baptista put on a stunning recovery drive and eventually claimed second, pulling a switch-back overtake on Sathienthirakul, who then held on to his first podium in the series.

Kanamaru stayed out of further trouble to finish fourth, while William Barbosa claimed his best finish in the championship with fifth.

Konstantin Tereshchenko took sixth, ahead of Damiano Fioravanti and debutant Diego Menchaca, who slipped to eighth after running among the top three for much of the race.

Frontrunners Stern and Leo Pulcini featured among the retirements, the former pulling off with a broken suspension and the latter stopping on-track with a seeming mechanical issue.