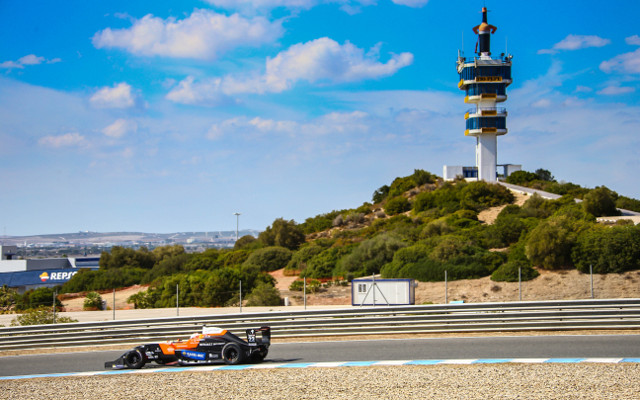 Formula Renault 2.0 Alps title chaser Jack Aitken will line up on the front row for the first race of the final round at Jerez, as wildcard Anthoine Hubert claimed pole in first qualifying.

Hubert, who won from pole in three of the four Alps races he contested at the start of 2015, beat Aitken to pole by exactly one tenth of a second.

With Hubert ineligible to score however, Aitken would still be on course to claim maximum points if positions remain the same in the race.

He has a 12-point deficit to fellow Briton and Koiranen team-mate Jake Hughes, who will start fifth on the grid and third of the points-scorers behind Vasily Romanov and Ben Barnicoat having been half a second off the pace.

Matevos Isaakyan is within 23 points of Hughes but could only manage 13th on the grid behind James Allen and Max Defourny, although he is sixth of those that are eligible to score.

Stefan Riener, another driver with a mathematical shot at 31 points behind Hughes, was a further two places back in 15th.